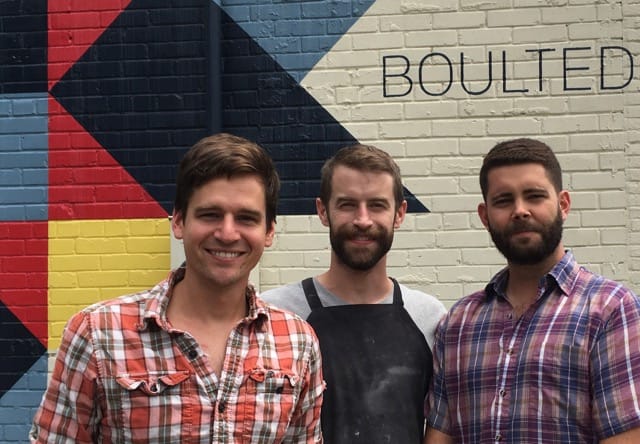 When Sam Kirkpatrick and Fulton Forde got together to open their bakery, Boulted Bread, in downtown Raleigh, North Carolina, they had an ambitious goal. They wanted to use fresh-milled, locally sourced grain and improve the design of currently available commercial stone mills. Fulton had traveled in Europe and North America learning from bakers who use heirloom grains and researching various age-old mill designs, and creating a plan for a new type of stone mill using locally quarried, natural granite and American-made motors and parts.

The current consumer market, Sam and Fulton believed, was “shifting away from inexpensive conventional practices and beginning to value high quality and process.” Their business would honor this shift toward intentional consumerism and serve the growing number of people interested in sustainably produced food in the greater Triangle area of North Carolina. Their customers would experience “the inherent value, sublime flavors, and simple elegance of bread as craft.”

A Slow Money lender provided $3,000 to cover the construction of a custom stone mill that was more effective, more attractive, and less expensive by thousands of dollars than the few other commercial mills available. Another Slow Money loan for $10,000 covered build-out costs, and Boulted Bread opened for business in August 2014. Sam and Fulton added another partner to the team, Josh Bellamy, who brought along excellent baking experience and a shared philosophy. 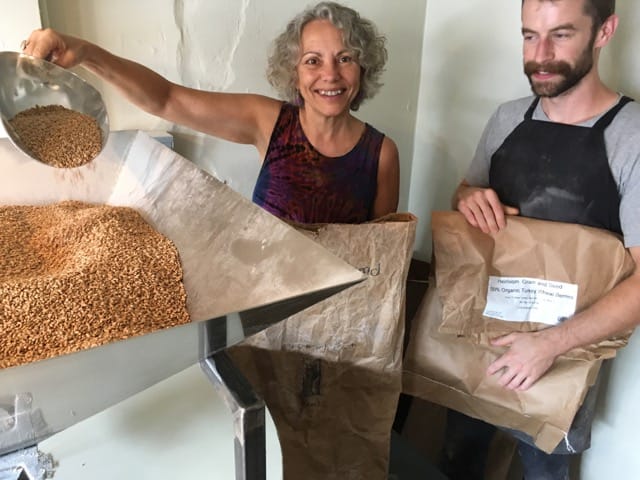 The bakery supports numerous local farmers by purchasing heirloom varieties of Southern grain that might be otherwise unavailable or lost, as well as vegetables, eggs, milk, and cheese for their breads and pastries. And they have hundreds of happy consumers. “Bread respects and pays tribute to all the players—farmer, miller, baker, and consumer,” Fulton explains. “Many of our customers are avid home cooks,” Sam told me, “and our moist, naturally leavened, seeded levain is something they can’t find anywhere else.”

Their business has been so successful that they paid off the smaller Slow Money loan two years early. “Our lenders were thrilled for the opportunity to help us get started and proud of us for paying it all back so soon,” said Sam. “We are enormously grateful.”

“My next project,” Fulton shares, “is building stone mills for sale to the public. I first wanted to build a mill when I worked at Farm & Sparrow in Candler, North Carolina. We used a German-made mill that allowed us to use a wide variety of locally sourced grains, but it had many shortcomings. There is an American mill-building company, but their mills also often leave people disappointed and dissatisfied.”

So, he investigated possible design improvements that could make the mill both much more effective and user friendly. He traveled around North America to research mills new and old, and slowly his ideal mill design emerged.

“I built a 26-inch stone mill for a small grain farm in California, another for Boulted Bread, and a third for Farm & Sparrow, to replace the German mill on which I first learned about milling,” Fulton explained. “There is a nascent local-grain movement seeking to extricate grain from the industrial model and in desperate need of high-quality American-made mills. I had orders from four bakers and two mill/grain projects. I began construction on the first three mills ordered. We needed $12,000 to help finance these orders. We planned to pay the money back in 18 months or less.”

Two Slow Money NC lenders who are frequent customers at Boulted Bread made loans of $9,000 and $3,000, and New American Stone Mills is on its way. 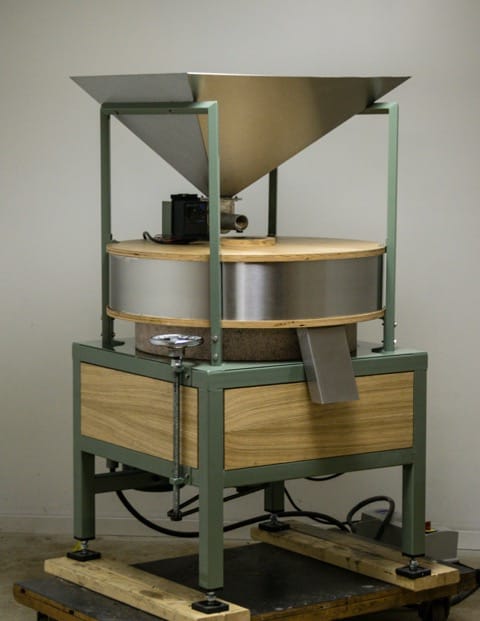 Fulton is now collaborating with Andrew Heyn, owner of Elmore Mountain Bread in Vermont, to offer a larger, 40-inch stone mill for use in medium-production bakeries or specialty gristmills.

Farmers are planting more heirloom grain varieties, local milling is growing, and for us eaters, the bread and pastries just keep getting better— for the planet and for us.

For every $1 donated to Slow Money NC, $50 flows to local farmers and food enterprises.
Slow Money NC‘s work is supported entirely by folks like you who recognize that our meager one-person nonprofit is having significant impact on our local food system. Learn how YOU can help bring money down to earth.
Please donate today at Slow Money NC.

This blog was originally posted at www.slowmoney.org