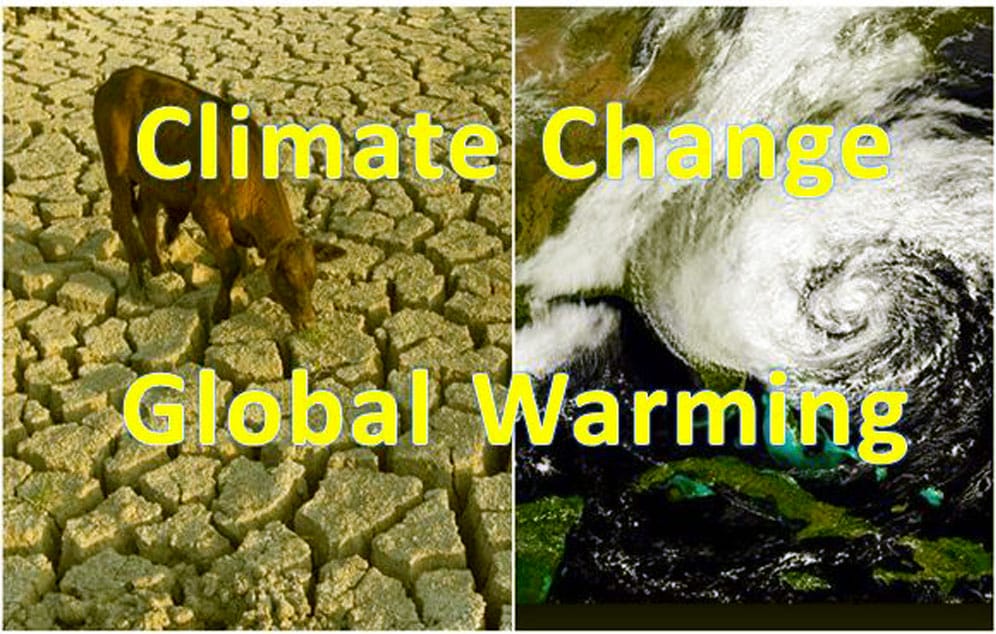 Recent scientific studies have shown that the effects of climate change are already occurring and that these changes, as well as global warming, are predicted to increase the frequency and severity of droughts, heat waves, flooding, hurricanes and other weather events which will in turn have an enormous negative impact on our food supplies and human populations.

For example, over-plowing and deforestation have turned fertile land to arid wasteland.  Overuse of chemical fertilizers has led to residual accumulation of salts, sterilizing soil microbes.  Leaching of these residual nutrients into waterways can also cause eutrophication, resulting in the death of aquatic life. 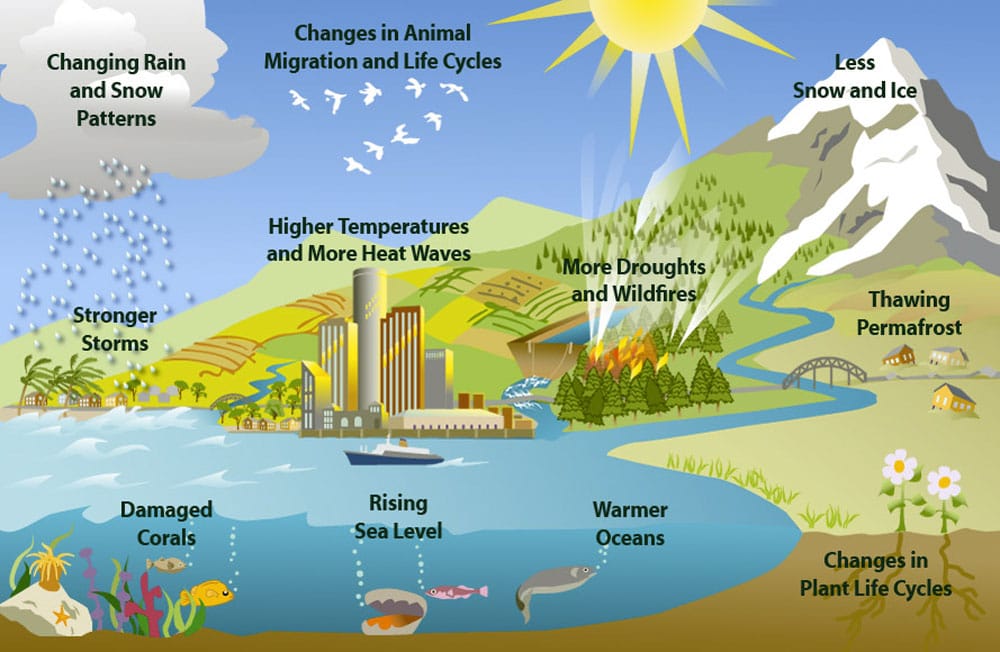 Infographic by the Environmental Protection Agency.

Other natural resources like potable drinking water are being depleted at rates faster than natural processes can restore them.  In the United States, 80-90 percent of fresh water is used for agricultural irrigation alone, and removal of this water from streams and aquifers is threatening many species with local extinction as well as exacerbating the evaporation of water from the land into the atmosphere.

Effects of climate change on water: 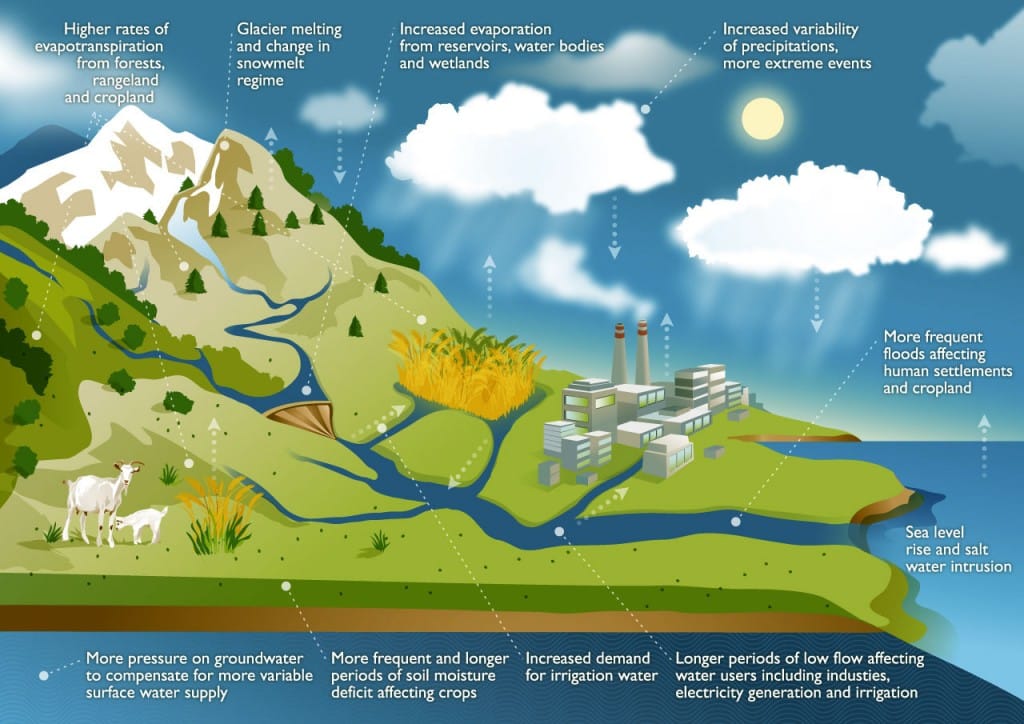 Infographic by the Food and Agriculture Organization of the United Nations (fao.org)

There is no doubt that food and water shortages will threaten our infrastructure in the near future.  Genetically modified (GMO) crops, pesticides, and herbicides could potentially offer more bio-diversity to our food supply by making plant species more tolerant to changing weather conditions, more tolerant of drought, less susceptible to pests, and easier to manage weeds growing around them, but these solutions may come at a high price, due to their associated human health and environmental risks.

For example, the build-up of pesticides and herbicides in our soils can lead to the death of microbes that are responsible for soil fertility.  Animal and insect pollinators, which are required for 35 percent of the global food supply, are being potentially threatened by GMO crops and chemical use.  Predators of pests also come under threat when they eat tainted pollinators.  Reports have concluded that some animal compost is still laden with persistent-herbicides from the animals’ plant feed, and this compost has in turn caused crop failures when incorporated into the soil.

Human and animal livestock that feed off of pesticide- and herbicide-laden GMO and non-GMO crops are also at serious health risks.  Alternative organic and sustainable farming strategies and systems will help to reduce the health and environmental risk associated with today’s problematic industrial agricultural model. 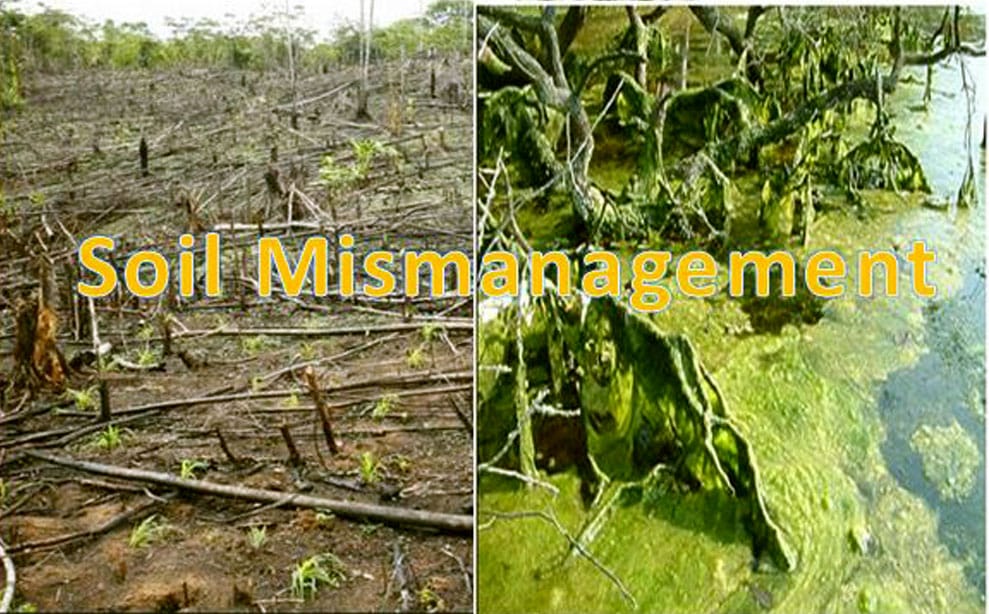 Rising population is yet another future challenge to the security of our food systems.  By the year 2050, the earth’s population will be at 9 billion, and this growth will include widespread “infilling” of desolate inner cities and a concomitant increase in food requirements, fossil-fuel consumption, and global urban poverty.  By growing food closer to where it is consumed, regional food systems that decrease food miles and provide inner-city jobs will help combat the problems associated with this projected build out.

Sustainable agriculture faces many challenges, and solving these problems will require collaboration between many groups including farmers, consumers, industries, and policymakers.  The need for large-scale urban food production that conserves water and is environmentally sustainable is crucial.  Using sustainable farming practices like aquaponics to grow food in the city, for the city, will not only create a new labor market for today’s urban farmers, but it will play a pivotal role in the ecology of social food justice.

What is aquaponics?  Stay tuned for my next article, describing aquaponic farming and how it might be one very important step in helping achieve sustainable food security, while protecting the earth’s resources that we depend on for our very life.

Read the second post in this series: Aquaponics: a new breed of sustainable farmers and social justice activists

Learn more about aquaponics from Tinker-Kulberg, in person, at her Aquaponics Workshop, taught along with Mike Yablonski, Ph.D, this Sunday, Oct. 18, from 10:00 AM – 3:00 PM.