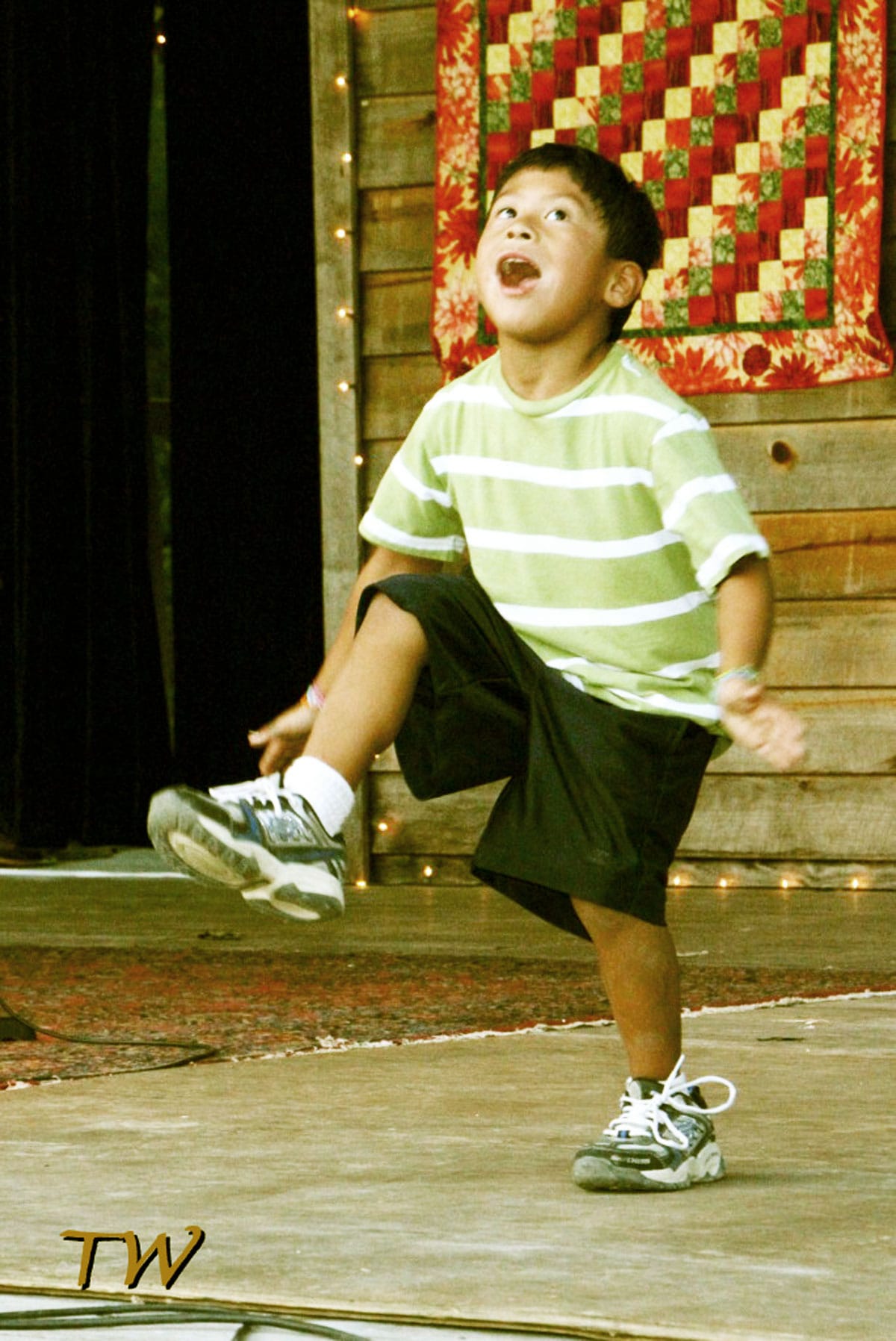 Like many festivals and events, the Hoppin’ John Old-Time & Bluegrass Fiddlers’ Convention started out with only an idea, and a handful of folks who came out and made the first one memorable. When we at Shakori Hills, inspired by a beautiful Mt. Airy Fiddlers’ Convention in May of 2007, decided that same summer to start one of our own, it was hard to believe that with only three months planning time, it could even happen.

Amongst the 300 or so musicians, friends and local folks in attendance, one young man stands out in particular. It was Saturday morning and the emcee just announced the children’s dance contest. The sparsely populated field went silent…there were no takers.

Then we heard a commotion moving up to the stage.. three tow-headed cuties all under the age of 6, all bearing the same last name. This little family comprised the contest. The oldest, Noah, went first, shuffling his feet a little, occasionally in time to the music, then the middle sister, who added just the slightest of shimmies to her shuffle, and finally the youngest who just stood there and smiled, curtseyed and ran off giggling.

Three ribbons to award, all with a ranking, from one family. Oh. Boy. The easiest thing to do was just to stick the the natural ranking of their family, strictly of age, having nothing at all to do with talent or dancing ability! Mom thought it was a good idea to get them on stage, since they had been boogie-ing around the campfire well past their bedtimes the night before, this having been their first exuberant introduction to the twang of a fiddle and banjo duet and the thumping of a bass. Sometimes there’s just no containing it when one experiences it for the first time… but on a big stage, in front of lots of people, was something different.

This format of contests and prizes, the way of great traditional fiddlers’ conventions like Clifftop, Mt. Airy and Galax (going into it’s 80th year) seemed odd in that moment. In North Carolina and Southern Virginia, this seems the preferred way to structure our gatherings when we all have the same instruments and play the same tunes. One can know where someone comes from by the way they play a certain song…

But I realized it’s not really about competing. The prize is just what tricks our brains into getting on stage…It’s about getting out there and showing your stuff, sharing your joy and talents with the world. It’s about gathering together, swapping tunes and stories with old friends or strangers. It’s about the experience of coming out to your hometown fiddlers’ convention for the day — hearing the music of masters and beginners mingled in together, eating good food, cake walks and square dances and good old-fashioned fun. This little part of the festival which takes place on the stage is just the place to share the pure exuberance of string band music and dancing feet with all of us who enjoy it.

Hoppin’ John, now in it’s 8th year has really grown since that first one! We invite you to come out and experience it — it’s a full-participation event! Our signature happening is the Hoppin’ John Cook-Off: black eyed peas, rice and anything else you can think of to make your hoppin’ john the tastiest. In addition to the band and instrument contests happening on stage, we’ve got square dances, cajun dances, instrument and dance workshops, musician showcases and a cake walk under the big tent; hayrides, craft tent, story-song time for the little ones and great food. Come out for the weekend or just the day. We hope to see you soon!