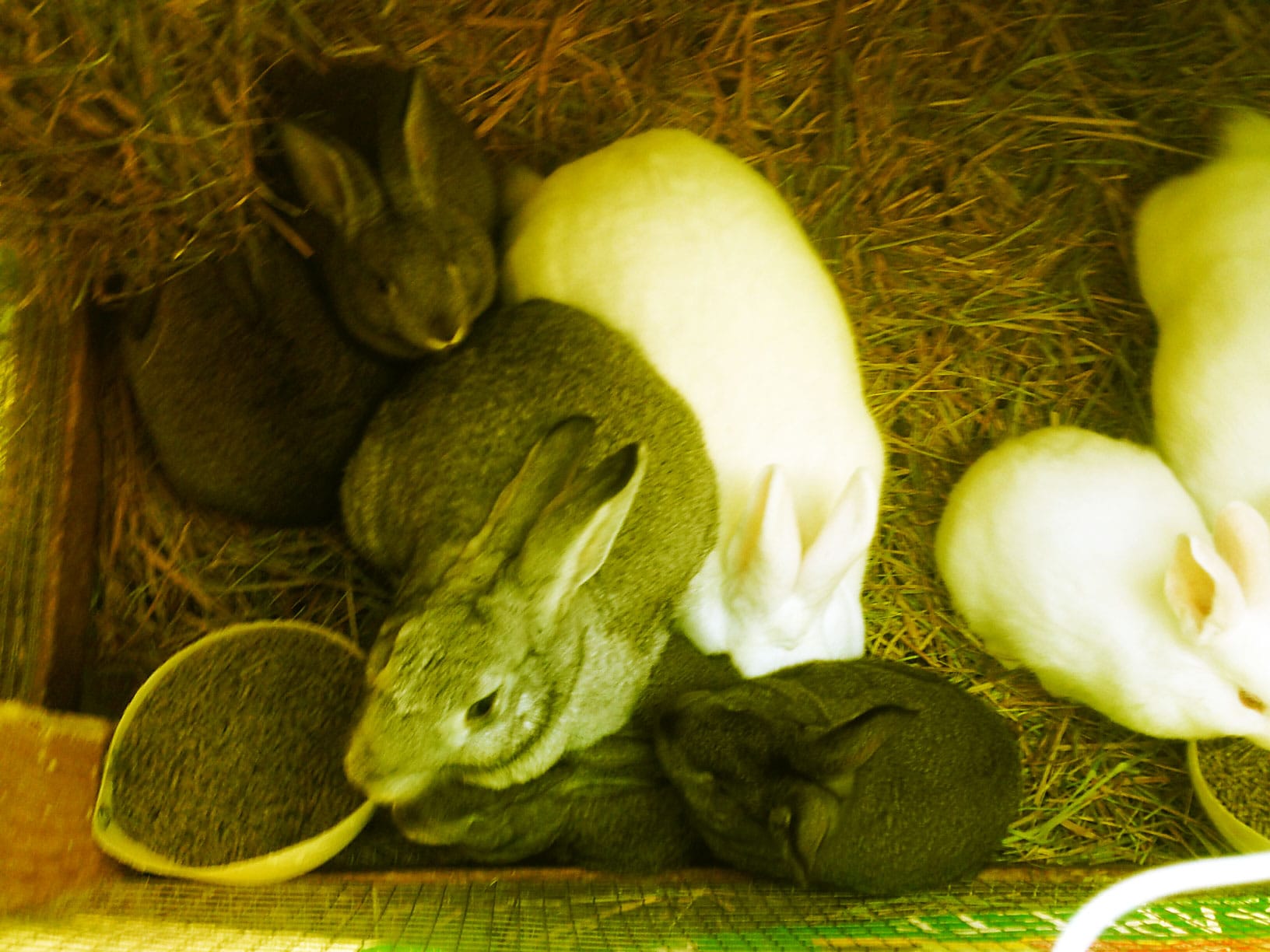 Rabbit farmers Mary DeMare and Dan Shields, of Pittsboro’s Fatty Owl Farm, get calls every week from restaurants, food co-ops and others interested in buying local rabbit for their menus or display shelves.  But because of laws requiring rabbit meat to be processed in a North Carolina Department of Agriculture (NCDA) certified processing facility, which DeMare and Shields don’t have close access to, they can’t sell their rabbits to anyone who will re-sell them.  The nearest such processing facility is four hours away, in Asheville, so Fatty Owl Farm has thus far been limited to selling directly to customers via farmer’s markets. 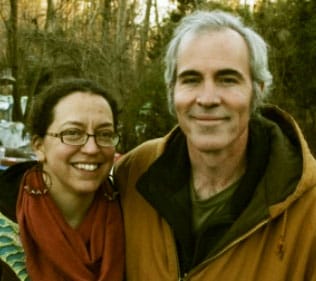 But with their new BarnRaiser fundrasing campaign, DeMare and Shields are setting out to raise the money they need to build one of these facilities right on their land.  They are offering prizes to contributors, including a year’s supply of rabbit meat, market totes made from feed bags, and more.

I’ve personally cooked up some Fatty Owl rabbit, procured at the Chatham Mills Farmers’ Market, and the cute lil’ bunnies made for some delicious stews.  My dog is also very fond of their liver and other organs, which they sell as dog treats.  So far, so good.  But I’d really love to be able to buy some of this very sustainable meat on the menu of one of my favorite local restaurants, to see what a real chef could do with some Chatham rabbit. Or to be able to swing by the co-op and pick some up for an impromptu weeknight curry. 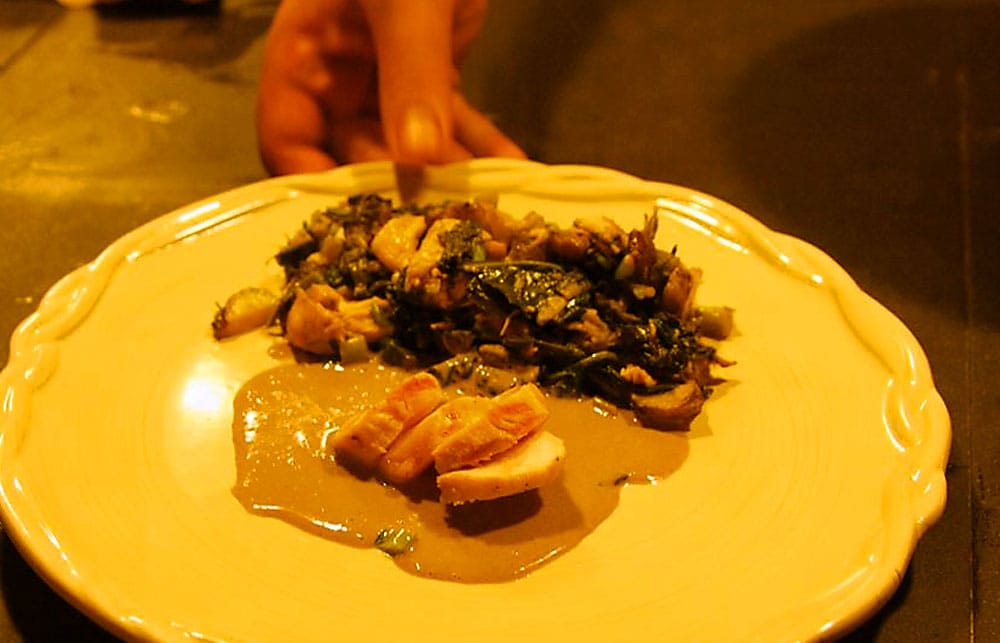 The good thing about this new facility is that not only will restaurants and other purchasers be able to buy rabbits raised lovingly at Fatty Owl Farm, but now anyone raising rabbits will be able to take them to the farm for processing, gaining a new potential income stream for themselves, and contributing to the sustainable agriculture movement.

DeMare and Shields also started offering workshops in raising rabbits for meat last year, so that they could spread the knowledge around the community, to other homesteaders, farmers, and interested folks.  You can take one of these workshops this spring, in fact, and a summer one will be offered as a prizes for contributing to their BarnRaiser. 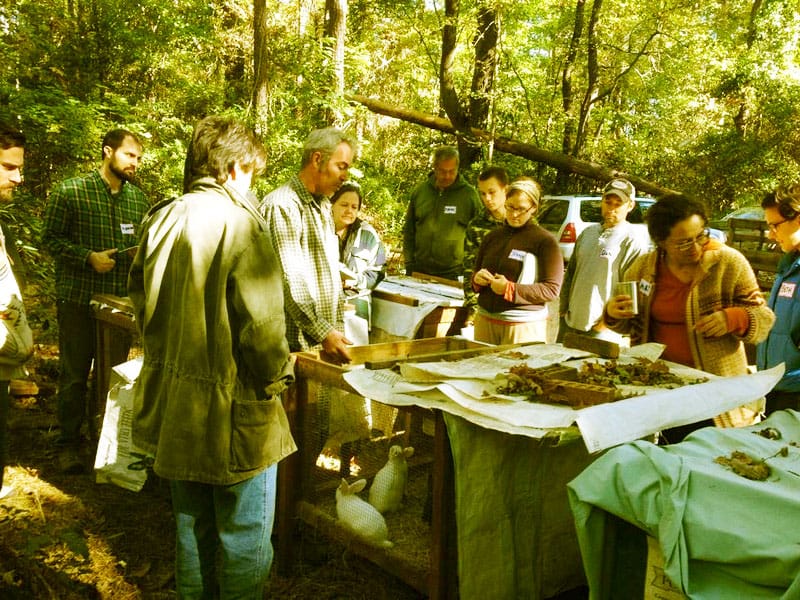 Chatham Rabbit was actually a sought out entree on menus as far away as New York City, sixty years ago, before chicken took over our dinner tables as an easy to raise staple food.  Ask your grandparents.  They might remember eating rabbit when they were growing up.  Mary and Dan want to bring it back, and we are behind this idea 100% at Abundance NC.

I got a chance to ask Mary DeMare a few questions earlier this week about her rabbits, her experience farming, and her BarnRaiser campaign.  The interview after the break. 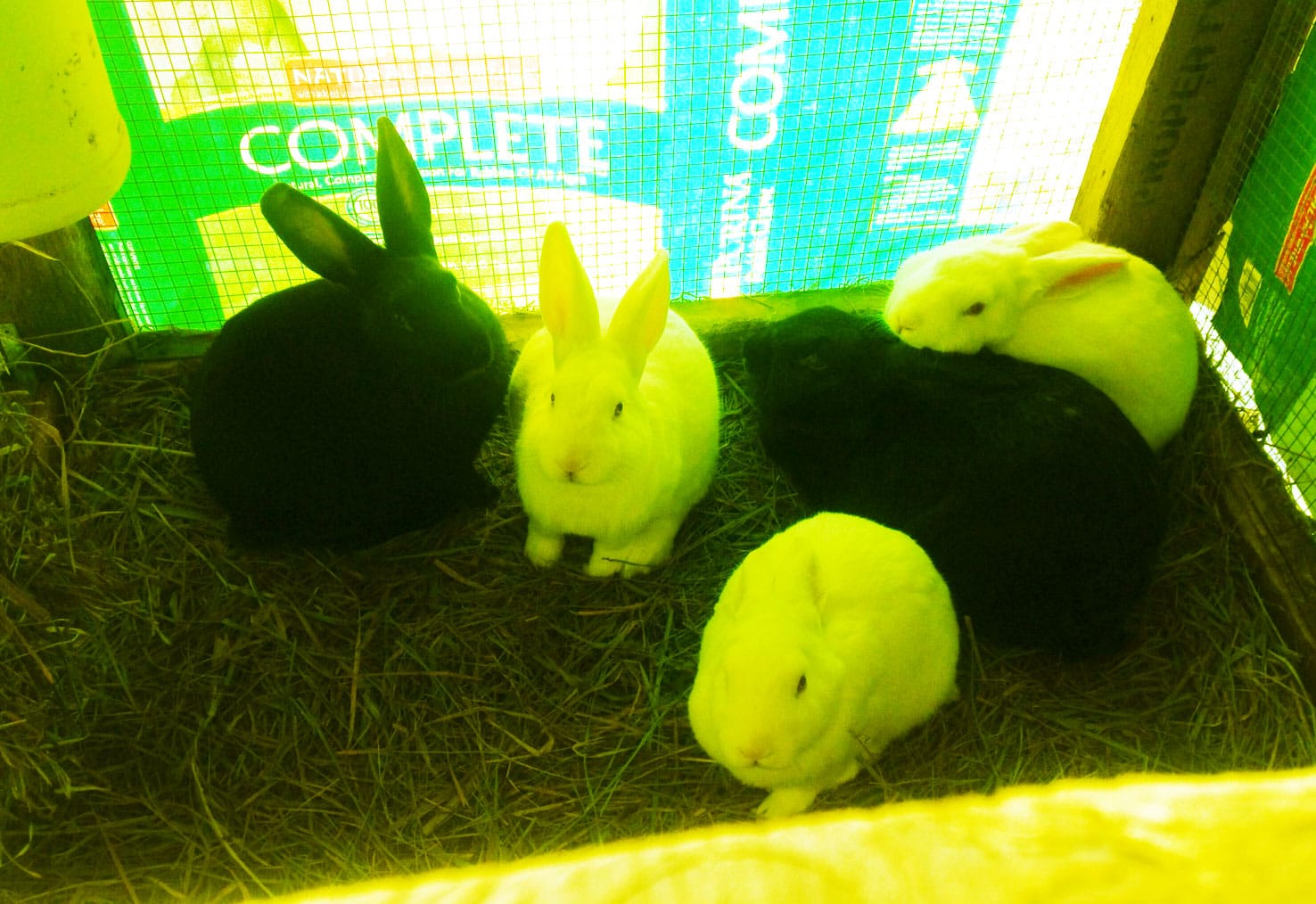 Dan has been farming for years.  How did he get interested in raising rabbits for meat?

Dan initially became interested in rabbit as an alternative to pastured poultry.  That market was pretty saturated, and he was looking for something different.  We had very little land to start farming in Pittsboro, but Dan had the bug!  We started with seven does and two bucks in October of 2012, and haven’t looked back.

So why did go for rabbit, specifically? What are the benefits of rabbit meat, both as a farmer and as a consumer?

From a farming standpoint, rabbit is a highly sustainable meat.  It takes relatively little space and produces a quality meat in a reasonable time.  The manure the rabbits produce is a great fertilizer to be used directly on crops. Also, it is a great feedstock for vermicompost, and worms are definitely in our business plan!

Another great thing about rabbit is that there is very little waste. The offal is composted, other organs are harvested, hides can be tanned and the remainder (heads, feet, etc.) can be used for dog and cat treats.

For the consumer, there are many benefits.  Rabbit is an incredibly healthy meat, low in fat and high in vitamins and protein.  It’s easy to use the whole rabbit!  I often use the crock pot method and just cook it slowly over the course of several hours.  The meat falls off the bone and it is delicious.  It is also very versatile and will take on whatever flavors you are using (it’s great in a curry).  Rabbit has a very good meat to bone ratio, so you get more meat from the same weight of another whole animal. 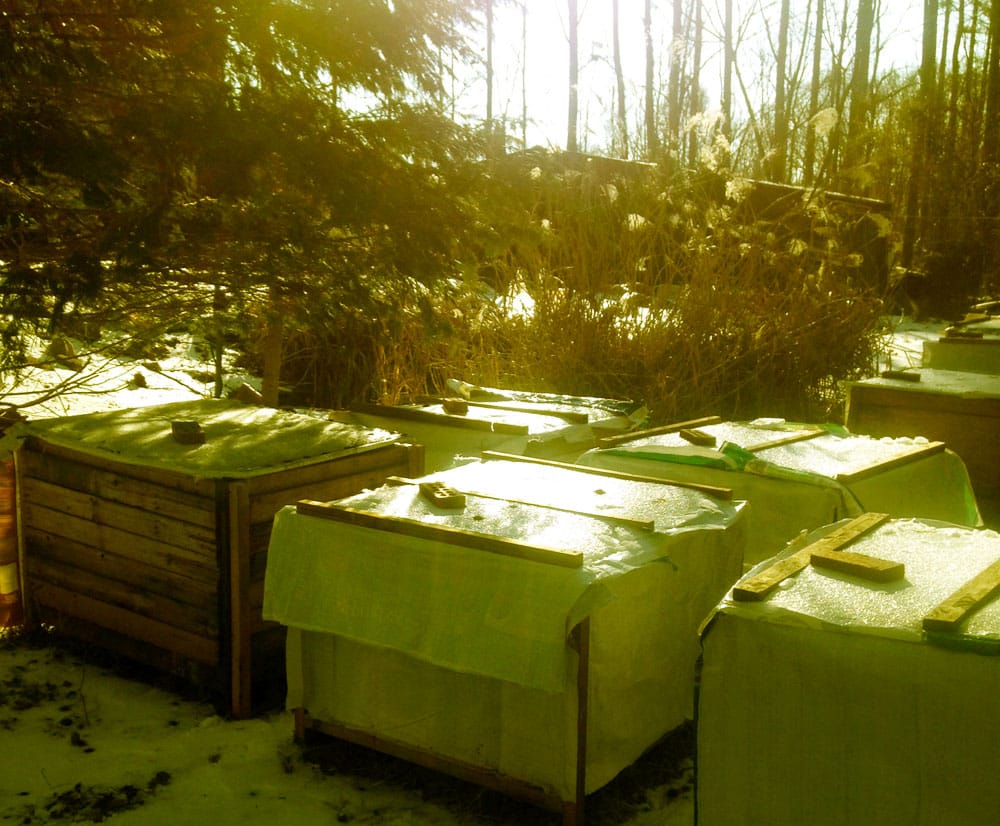 That’s exactly what happened when we cooked it in our Le Creuset pot all afternoon.  So tender and delicious.

So you are raising money to build a certified processing facility on your farm.  This facility would allow you to process the rabbits you raise, so that you could be involved with their raising from birth (and even conception) to death.  Why do you want to be involved through the whole process?

It is incredibly important to us that our rabbits are treated with care and respect, from beginning to end.  I spent this morning warming up two kits (baby rabbits) that were born to a new mother who didn’t quite know what to do, so the kits were out of the nest and it was only 20 degrees.  We put the kits in a hat to warm them up and moved them to a foster doe (mother rabbit).

We care about every minute of the lives of our animals.  The end of life needs to be as stress free, quick and painless as possible.  Unless we are doing it ourselves, there is no way to ensure that is the case.

And this facility would also be a place other local farmers could process their own rabbits, right?  So they would hire you to process them.  Do you think this will enable more people to start raising rabbits locally?

We hope to be the starting point for many more rabbit farmers in North Carolina!  Our processing facility will be used as a teaching space for farmers, homesteaders and anyone interested in raising and processing their own meat.

Local restaurants have shown interest in purchasing rabbits from you, right?

Yes, we have several restaurants ready for rabbit!  Angelina’s Kitchen and Pittsboro Roadhouse in Pittsboro, Kitchen in Chapel Hill, and The Eddy in Saxapahaw are just a few.

Can you explain the taste of rabbit to people who might not have tried it?  What kinds of ways could cooks use this meat?

Rabbit is a mild and sweet white meat.  I know that everyone says everyone says it tastes like chicken, but it doesn’t!  It’s sortof got a poultry flavor, but I would characterize it more like a mild turkey than chicken.  Using the whole animal gives cooks many options.  Stuff the loins, make stock from the bones, fry the legs breaded and it’s all amazing! 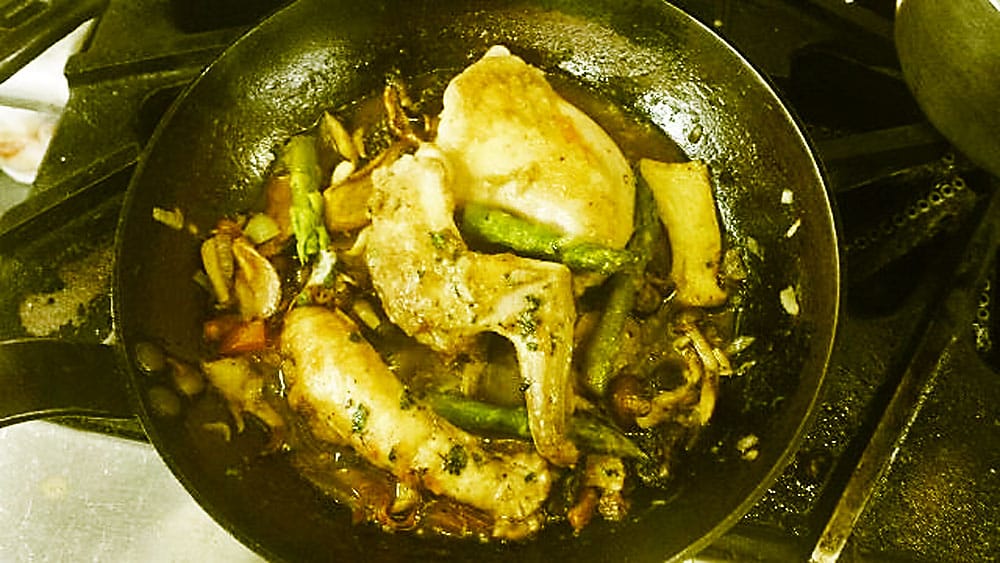 Mmmmmmm, scrumptious rabbit in the pan!

They require constant care, as with all livestock.  Since our rabbits are outside in houses and not indoors, our biggest difficulty is always the weather.  We have to make sure they are warm and dry and have plenty of water, no matter the weather.  Of course, as with many small scale farmers, we both have off-farm jobs, so making sure that all the rabbits are happy and fed before we head off everyday is often a challenge.

The best part are the rabbits!  We learn from them everyday. They are interesting and funny.  There is a phase that they go through at around 3 weeks that I call popcorn bunny.  They basically pop up in the air and spin around and I love watching it.  It’s one of the best things about our outdoor houses. They are so much bigger than a traditional hutch, so we can watch the rabbits go through their natural stages of development, grow and learn.

There are a million!  Since there is very little fat on our rabbits, you have to add it.  I like to brown the pieces in bacon fat and then put the browned pieces with all the best veggies in a crock pot and let it go for hours and hours. I add rabbit broth that I make with the backbone while I’m browning the pieces.

You’ve offered rabbitry workshops in the past. What happens at a rabbit raising workshop? What can people expect?

We have had some great workshops!  We talk to the participants about how to choose rabbits, how to sex them (it’s actually more difficult than you might think!), how and when to breed, what to feed and with the whole day workshop, how to process your own rabbit.  It’s a very hands-on workshop, so participants should expect to maybe get a little muddy.

How was your rabbit received at the recent farm to table dinner at Piedmont Biofarm?

It was a lovely dinner!  We enjoyed working with [chef] Geoff a great deal. He came out to the farm and helped process the rabbits that were used at the dinner.  We are looking forward to the next one!

Support the Ready for Rabbit BarnRaiser:

Check out Fatty Owl Farm’s Ready for Rabbit Barnraiser video above, or follow this link to contribute to their campaign to build a certified rabbit processing facility on their farm: Ready for Rabbit. Get great prizes in return for your help.

Want to start raising your rabbits now?  Sign up for our spring DIY rabbit raising workshop with DeMare and Shields.  The inaugural edition of this workshop was a huge success.  This time will be even better.

Here’s Mary’s great beginner recipe, which provides an easy way to cook rabbit and make it taste divine.  Little skill required, but you’re sure to impress yourself and your friends or family.

Rabbit Stew
Recipe Type: entree
Cuisine: American
Author: Mary DeMare
Prep time: 1 hour
Cook time: 5 hours
Total time: 6 hours
Serves: 4
Since there is very little fat on our rabbits, you have to add it. Bacon fat adds a great flavor, and you can also include actual bacon in the stew if you like.
Ingredients
Instructions
3.2.1311
Menu