Instead of Buying Guns or Hoarding Food, Let’s Feed Each Other by Michele Bigley 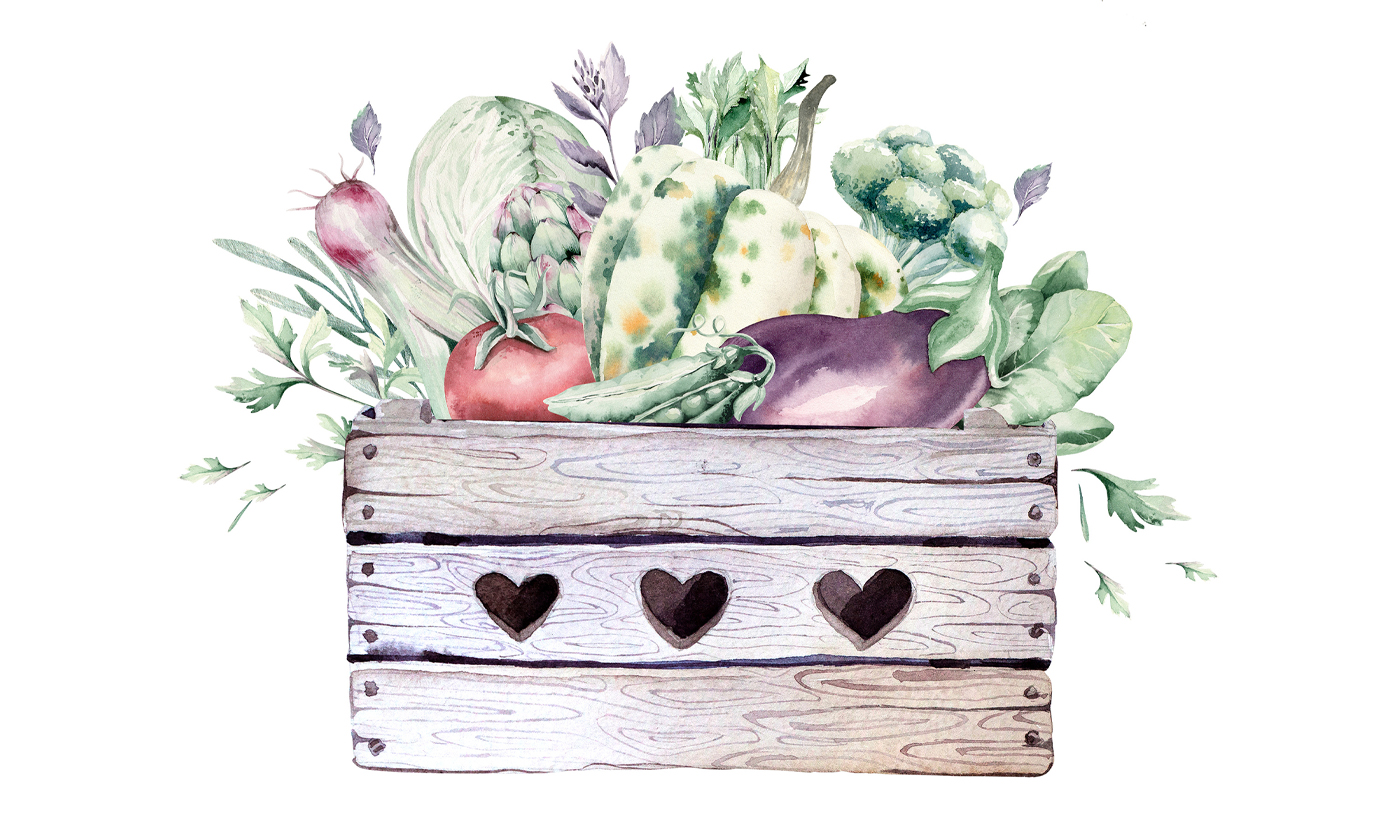 After the nightly news showed people lined up outside of a Philadelphia gun shop in mid-March, my brother called me saying he had his guns and ammo at the ready. This echoed the hoarding I’d seen in my local grocery stores, creating the lack of garlic and toilet paper and rice. Everyone was terrified, trying to figure out how to survive this pandemic. I feared that, once again, too many of us were going about survival all wrong.

From my patio in Santa Cruz, California, I watched a scrub jay deliver a peanut shell to its oak-tree home. My neighbor hollered hello from the street below, explaining that she was afraid to go to the store for groceries. “A person was held at gunpoint at the Target,” she said. “Everyone’s going crazy.”

I wanted to go beyond simply planting a victory garden for my family’s sustenance. I wanted the sustenance to be shared.

I looked down at the weedy patch of grass in front of my house. It reminded me of a time, growing up in Los Angeles, when a friend took me to his Watts neighborhood to show me the community gardens growing under the freeway, pointing out the abundance of free produce for residents. It occurred to me that we might be able to create something similar. “Do you have any seeds?” I asked my neighbor. “I’m going to try to plant us a community garden.”

“I have a pitchfork for you to dig up your weeds and chicken wire for that gopher,” she said, pointing at the holes in front of my house. “Oh, and some flower seeds to get some pollinators into your victory garden.” The semantics of this subtle distinction gave me pause.

My grandparents had “war gardens” in the 1940s, and small, potted remnants from that time took root on their patios well into their golden years. I’d often asked them to teach me how to grow veggies. But they argued that because grocery store shelves were fully stocked again, they didn’t think it was necessary to teach me how to put in the work of growing my own food.

Yet now our local farms have waiting lists for their Community Supported Agriculture weekly deliveries. Now my elderly neighbors are afraid to touch lettuce at the grocer’s. Now large farms are throwing away millions of pounds of produce at the same time that more than 41 million Americans go hungry each day, and, according to the nonprofit Feeding America, that number could rise by an added 17.1 million because of COVID-19. Now the abundance that once felt like the marker of American life feels flimsy.

COVID-19 will change us. It’s just a question of how. Each morning, I wake up thinking we have the chance to create a better narrative. Together. Years of being a community activist taught me that the only way to survive anything is with the help of the people around you. And feeding one another is a good place to start.

In my community of Santa Cruz, where almost 15% of the population lives below the poverty line (that’s above the national average of 12%), organizations are stepping up to feed people for free. Our recycling company, Grey Bears, carts free bags of produce to elders each week. And the Homeless Garden Project has donated more than 7,000 pounds of organic, immune-boosting veggies to local nonprofits that serve our unhoused. These vegetables have been farmed by formerly house-less graduates of their trainee program. “The community’s response to help our most vulnerable neighbors turns what could be a dark and lonely time into an understanding that we are all in this together,” executive director Darrie Ganzhorn said in an email.

Santa Cruz’s tiny K-8 Live Oak school district is partnering with Second Harvest Food Bank to offer complimentary, biweekly bags of produce and nonperishables for families, many of which are under the poverty line. The collaborative is also providing free sacks of breakfast, lunch, and dinner that include fresh fruits and veggies, dairy, protein, and snacks for all Live Oak youth. Administrator Stacey Kyle says that because they’ve heard directly what community members need, they’re now “expanding to offer reheatable meals on weekends, too.”

We can plant seeds that take a little weight off our overburdened food system and grocery store workers.

Inspired by all this generosity, I wanted to go beyond simply planting a victory garden for my family’s sustenance. I wanted the sustenance to be shared, so I sent out a blast on Nextdoor.com. Within minutes, people offered up compost bins, some more seeds and soil, starter pots. My septuagenarian neighbors brought over tools, advice, and veggie starts. Another guy I didn’t even know was scavenging scrap wood from a construction site nearby; when I asked about how to make a garden bed, he lugged over some wood, and constructed one in my yard.

The retired crisis therapist across the street noticed the raised bed and said, “In the news, we’re seeing the worst of humanity right now, but around us we’re experiencing extreme acts of kindness, too.”

She’s right. All over California, I’m hearing about neighbors with excess offering it to their communities. San Francisco resident Colleen Irwin put up a table in front of her house with the sign “Emergency Food Bank” in her Bernal Heights neighborhood. “The table fills up and empties four times a day,” she said in a Facebook message, adding that she can read the pulse of her neighbors’ needs after diapers and a white cake festooned with sprinkles were both gone in minutes.

David Reber is placing sourdough starter in baggies around San Francisco, free for the taking. Folks in need of eggs have been invited to put cartons on the doorstep of one family with chickens, and they’re finding offerings of baked goods left on their porch in return. All over the East Bay, people are converting Little Free Libraries into Little Free Pantries. My kids even got in the game and made signs to announce that our little garden plot will soon offer free produce for the taking.

By the end of the second week of our shelter-in-place order, my peas and lettuce had sprouted. To inspire food to emerge from dirt felt victorious indeed.

I called my brother back and encouraged him to get to know his neighbors and offer to share the lemons growing on his tree. We should all find ways to connect with, and make allies of, the people who are suffering around us. My brother called me a hippie. He, like so many people I know, fears the worst in people. “When people get hungry, they do crazy shit,” he muttered.

Many Americans have been raised with this ethos of individualism. I, too, was taught to take care of my family above all else. With the threats of joblessness and hunger in every community, I get that urge to protect what’s ours, especially when we’re terrified that a stranger’s cough can land us in the ICU.

But in the 1930s and 1940s, 20 million Americans stepped up in a time of great global terror. They planted gardens in abandoned lots, on patios, and on rooftops. Today, too, we have the potential to shift how we engage with our world. In fact, social distancing requires it. We can broaden our perspectives and open our hearts to people with whom we might share nothing more than proximity. They will be the ones there for us in crisis. They will deliver chicken soup if we’re sick. They will check in on us if they don’t see us out and about. And they will let us know when the grocery store finally has some Clorox wipes.

In return, we can plant seeds that take a little weight off our overburdened food system and grocery store workers, nourish our bodies with vegetables to strengthen our immune systems, and get exercise and fresh air necessary for our mental health. Planting roots in our neighborhoods allows us to reassess the true meaning of community and show our neighbors that we have their backs.

Now six weeks into our shelter-in-place, the spinach and strawberries, tomatoes and kale, cucumbers and peppers are sprouting. When I called my neighbor to revel in these tiny green victories, she told me to look on my front stoop. There, I found a pack of toilet paper.

Michele Bigley When not delighting over her sprouting garden, award-winning journalist Michele Bigley is writing a book about taking her sons to meet the change-makers working to protect the planet from, and prepare their communities for, our climate crisis.