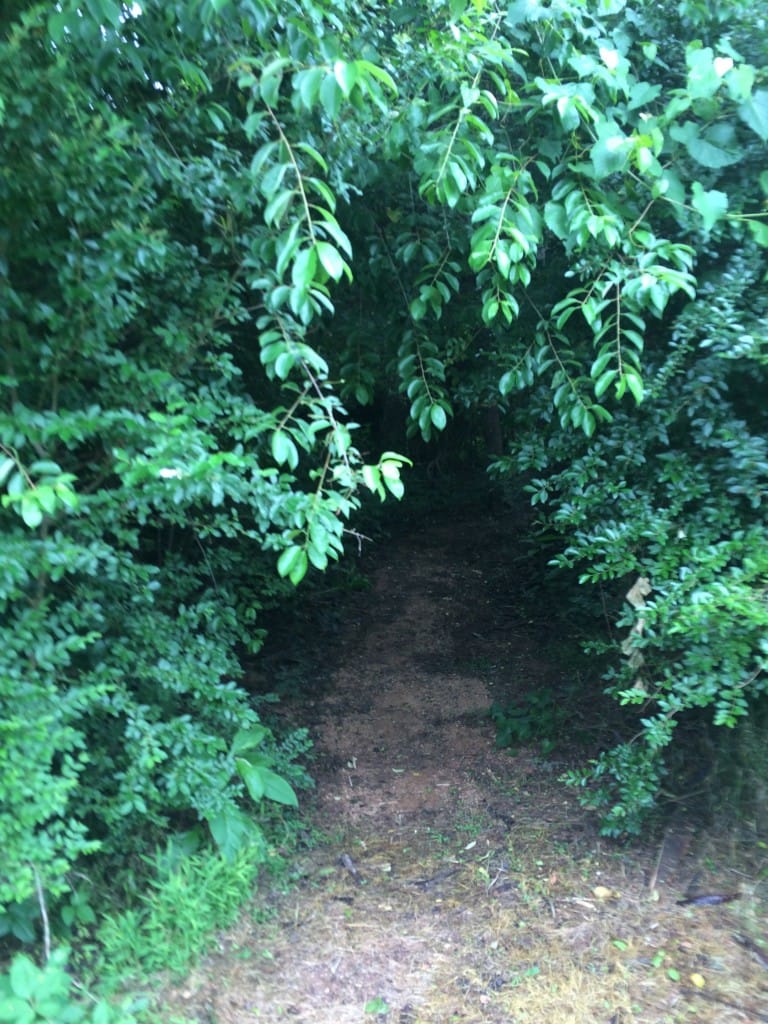 For years I have been suggesting to the good people of Abundance that they build a trail around The Plant.

Piedmont Biofuels has been donating fuel. HOMS has been donating a bio herbicide to knock back poison ivy. Lexie Wolf from Chatham Partnership for Children has jumped in. She runs a program called Shape NC that is all about getting kids moving outdoors. Bob and Camille are on board. Jules is knocking back privet the hard way. And the possibility of a trail is finally emerging. The trail will start at the gate, travel through the Fair Game Beverage apple orchard, cross over the fields of Piedmont Biofarm known as “Arizona” and “Montana.” They were christened such years ago when we brought in an excavator for the farm’s “westward expansion.”

It skirts the edge of the field and vanishes into the woods at a specimen black walnut tree. It emerges again at a honey locust that drops its pods everywhere. From there it winds around our constructed wetland, passes the “Secret Garden,” and disappears into a pine forest. It runs along the fence in the shade and pops back out at the southeast corner of Piedmont Biofarm’s south field. I love the view from that corner. There’s the pole barn in the distance, with its newly renovated “Sky Lounge,” and the Solar Double Cropping project looks far away.

The trail then plunges into a riparian zone that is mostly oaks, with a small creek. That creek begins with a spring that I found years ago but have not yet relocated. The trail will come out at the Piedmont Biofarm sign, where people come every Tuesday night to pick up their CSA boxes. It will then zig zag past some greenhouses and end back in the front parking lot. I wheeled it off with Gretchen Smith and Lexie. Gretchen volunteers for the Chatham Conservation Partnership. She’s knows everyone in the trail building world. It came out to about .78 of a mile.

I think this trail is going to be an amazing project. Abundance NC will use it in their kids programming. It can combat “nature deficit disorder.” Shape NC can use it to get kids moving outdoors. We are going to open it up to the public, who can use it to self-tour The Plant. Denizens of The Plant will use it as a shady place to get some steps while returning cell calls.

We are still in the “rough cut” stage at this point—and have not even completed the final loop. We are facing the usual mountains of garbage that reside in Chatham County’s woods, some clearing, some bridge building, some pulling of landscape material, and we are going to need about 256 yards of stone. But that’s just work. And time. And money.

This trail is going to be an exciting addition to our town….