One Foot in: A Fake Artist’s Take on Death Faire – a blog by Scott Latimore

One Foot in: A Fake Artist’s Take on Death Faire, by Scott Latimore

I have been working with the not-for-profit heart2heartnc for the past couple of months. With my diagnosis of stage four kidney cancer, this organization provides me with regular counseling as well as once-per-week Polarity Therapy sessions. Both activities have put me more in touch with myself as I live through the process of my death, and their experienced staff have taught me a lot about enjoying the day as it comes.

The Director of heart2heartnc, Cathy “Brooksie” Edwards, after finding out that I was an artist, put me in touch with Marcela Slade who runs Smelt Art Gallery at The Plant in Pittsboro, NC. Slade came up to Hillsborough for a studio visit, then asked me to contribute some work to their upcoming Death Faire. It was such an interesting disruption to my usual artistic process, that I wanted to say a little about how this show was different for me and how it altered the way I normally think about making artwork.

The end point of a painter’s labor is often exhibition. In the process of showing my work, I’ve always tried to hide my actual self through layers of fiction that then wind up contextualizing the images (see the “More About the Show” section behind the link for an example). I don’t want to be the front man, generally speaking. I find it more interesting when I concoct a personae to pretend to make the images, someone created by but also beyond me, what a novelist experiences with their characters, only through painting. A fake artist, if you will, for an era of fakeness.

However, with the opportunity to show my drawings at Death Faire, I wanted my contribution to point directly back to me as the creator. I needed a different approach, I think, because of the sacredness that I feel around the fact of death. Death is a departure from this world of a complex, networked self. It impacts people. I needed to keep this project from some of the irony I usually employ, so I oriented myself towards the autobiographical even as I was tempted to invent unreal narrative threads.

My friend Sebastian Matthews describing the aftermath of an automobile accident in his book, The Beginner’s Guide to a Head On Collision, wrote, “Let the words bruised heart blossom into their full, clear, un-ironic truth.” A similar revelation occurred to me as I was receiving a bone biopsy. I felt that there was nothing more real than that needle (with all of its questions) in the world. I wanted the work headed to Death Faire to honor these realities of cancer and car wrecks, together.

Still, I wound up having to compromise. When it comes to making artwork, I have an active stable of contrived, internalized personalities that have their say if ignored. 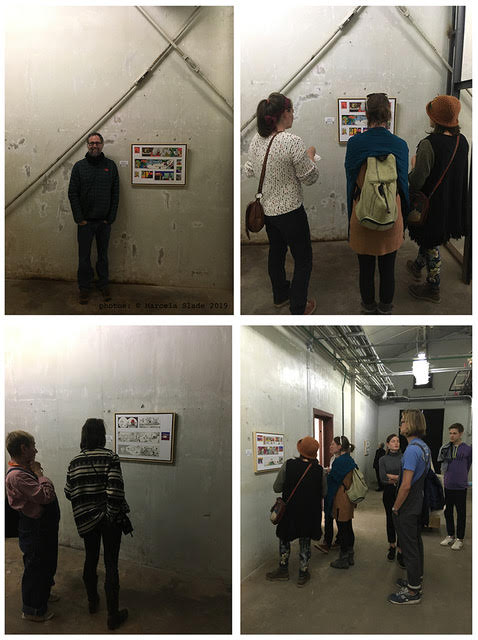 The series of drawings that I entered was a cartoon in six panels about my personal relationship to cancer treatment drugs. The images project my imagination trying to wrap its tendrils around what an TKI Inhibitor actually does. So I drew how the medicine I’m taking works without any pharmacological knowledge, using a grab bag of symbols that have been part of my visual language for years now. The finished drawings are nothing a research M.D. would recognize, but, for me, they represent a kind of flow chart into the future or a map of how I might survive just a little bit longer or maybe just a little bit better.

And, hopefully, the images themselves are ambiguous enough, the narrative open enough to allow viewers to partake in their own story as they witness the work. Substitute cancer medication for the thing that keeps you going every day. What would a cartoon of that look like?

Then there is the ground truth, the effects of the disease, death, sadness, pain. I don’t think that I would be able to show something so vulnerable and intentionally broken without the support of the people around me, both my family and the good folks who put on Death Faire.

To normalize death, have a parade around it. Take a selfie in a coffin. Launch a book about people’s tales of dying. All of this is critical work. Critical care for everyone. How can you live without it?

Scott Latimore is a painter and mixed media artist living and working in Hillsborough, NC.

“My creative career began with writing but transitioned to visual arts around the turn of this century. Nevertheless, my visual work draws heavily from narrative, language, poetics, and persona. The paintings, drawings, and sculptures that I make often emerge from different characters and entities which are a part of the ever-evolving life-world of my experience as filtered through particular tropes and fictions. Landscape and imaginary cartography are the primary forms of this expression, and the materials I use reference conditions common to the language and life of these personae.”

You can find Scott’s artwork and his blog at scott-latimore.com