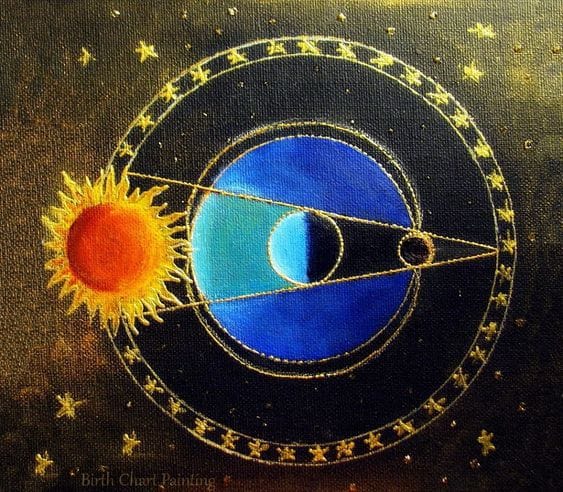 A lunar eclipse in Cancer on January 10th will add a particularly big wallop to the astrological energies that we are facing this week (read more about that here). On the 12th we have a rare alignment between Saturn, planet of tests and challenges, to Pluto, planet of destruction and regeneration.  This conjunction takes place in the sign of Capricorn – the sign under which we learn to master the material world through hard work, discipline, and achievement.  This is a cycle that only occurs every 30-38 years, and it is associated with challenging circumstances that test us but eventually bring about a seismic change in the foundations upon which we build our lives.

A lunar eclipse occurs at the time of the Full Moon, when the Moon is opposite the Sun and the Earth’s shadow falls upon the Moon.  This can only happen when the Moon and Sun are within fifteen degrees from the lunar nodes, the point at which the Moon’s orbit intersects with the orbit of the Sun.  The lunar nodes are considered to be points of fate and destiny, with the North Node representing the future, and the South Node representing the past.  This is why eclipses are often thought to be connected with events that are fated in some way.

This particular eclipse falls on the axis of Cancer and Capricorn, the polarity between the softness and vulnerability of feelings (Cancer) and the hard cold reality of Capricorn.  Under the influence of this polarity we are often faced with a choice or decision between our emotional world (Cancer) and the practical needs of a life in the world (Capricorn).  Because the Moon is full, emotions are heightened anyway and this eclipse is aligned nearly exactly to the conjunction of Saturn and Pluto described above. 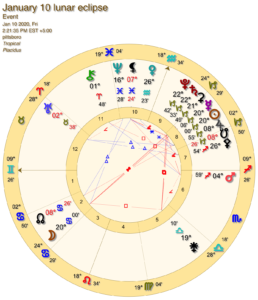 At the time of the eclipse, four planets (plus Ceres) will all be within five degrees in Capricorn, with Jupiter and the South Node also in Capricorn.  This strong Capricornian energy requires that we face the cold hard facts of life, and if we have been living in a fantasy world that world may come crumbling to the ground so that a new one may be built in its place – one with a stronger foundation and in which we can be more effective.  Yet the Cancerian Moon is soft and sensitive, living in a world where emotions and feelings are more important than achievement and mastery.

Meanwhile Jupiter aligns with the Capricorn South Node of the past to help liberate us from the bondage of past patterns of negativity that can arise in the name of realism. This release is a welcome expansion in the midst of what is otherwise a very heavy and contracting energy of pressure to change and re-align the very nature of our worldly lives.

It’s no accident that all of this is happening in a week that is full of news that could completely change the world we live in.  Stress in the middle east, impeachment, fires in Australia – everything is being re-aligned right now.  Eclipses can bring about an “unmasking” or revelation of importance, on a personal level, this eclipse could have the effect of bringing up issues from the subconscious that have been lingering for quite some time.  The influence of the eclipse, and the other events this week, will be most impactful for those of us with planets between 20-25 degrees of Cancer, Capricorn, Aries or Libra since our charts will be personally affected at those degrees.  But the events that are likely to occur between now and the 20th or so of January could have an effect which will linger for quite some time to come.

The presence of Ceres, the goddess of the harvest, in the midst of all this suggests that we MUST now take the steps to take care of ourselves.  I like to think of Ceres as symbolizing our relationship with our incarnation in all of the ways in which we must take care of our bodies, our minds, and our souls and spiritual connection.  This goes well beyond the popular Instagram self-care soundbytes of epsom baths and detox – under the influence of Ceres we must recapture our connection to the wild, the softening and healing effect of the natural world.

Mercury, the planet of the mind and communication, is positioned poorly at this eclipse which suggests that the usefulness of the rational mind will be somewhat limited.  Geeky astrological detail:  Mercury is “combust” (and in this case, “cazimi” between Mercury is only six minutes of arc from the Sun), considered to be an unfavorable alignment because Mercury is rendered invisible by the light of the Sun. There is a sense that in the midst of a seismic shift, we will be unable to understand logically what is occurring and could be overcome with the emotions of the Cancerian Moon.

One way in which we can honor this Cancerian eclipse is to circle our tribe around us and consider ways in which we can find nurturing (Cancer) in a world system which tends to take rather than give (Capricorn).  It is important to remember that planetary cycles don’t create problems, but like a hurricane or a tornado they will have a negative effect where a problem exists.

It will also be helpful under this Full Moon to pour out your thoughts and feelings into a journal which will help to solidify them into the material world, a nice way to blend the polarities of Cancer and Capricorn.  The fact is, some will be affected by the planetary events of this week, and others will sail through without a care.  Much depends upon how our own chart is affected, and also by how well we are able to navigate both our emotions and the needs of the material world.

In the meantime, watch and wait.  This is not a time for emotional or impulsive decisions.  Instead, this is an excellent time to create a plan, a Capricornian structure by which we can co-create a solid future that allows plenty of room for greater integration between our feelings, emotions and safety needs (Cancer) as well as material success (Capricorn).  The energies of the eclipse are building now and will last a few days after the actual event on the 10th, but the connection between Saturn and Pluto will be felt for much of the month of January.

Lynn Hayes has been a practicing astrological consultant in beautiful North Carolina for over 35 years, working with clients all over the world. She focuses on therapeutic and healing approaches to encourage greater empowerment and personal growth. She is available for personal consultations.