They marched for polar bears and the future of local food 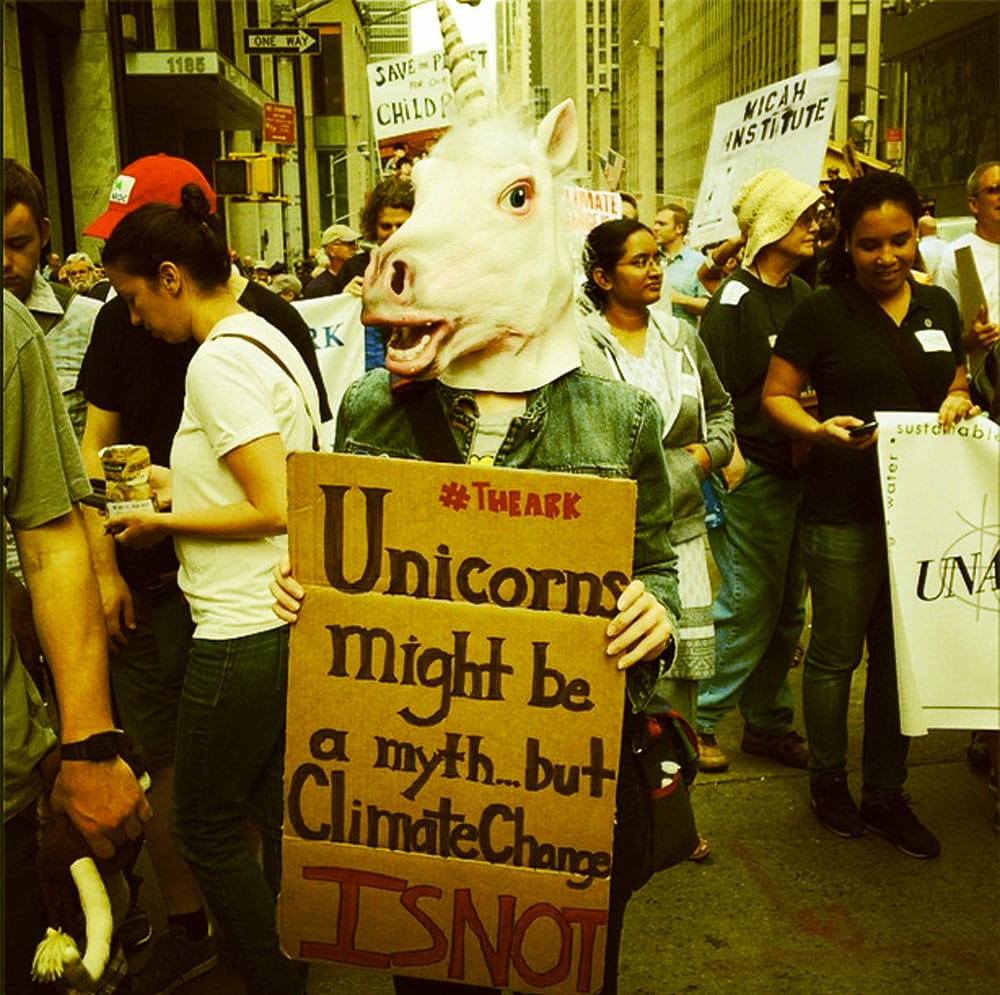 Last Sunday, Sept. 21st, more than 400,000 people marched through the streets of Midtown Manhattan in New York City in the biggest climate protest in history.  The demonstration, called the People’s Climate March, was aimed at putting pressure on speeding up a U.N. process that’s often painfully slow, and urging world leaders at this week’s United Nations summit to commit to concrete climate action.  Worldwide more than a million people took to the streets.

People came from all over the country, often in buses or trains, to save fuel, and they dressed in festive costumes and carried banners proclaiming their message.  For example, The Center for Biological Diversity, a nationwide organization that works “to secure a future for all species, great and small, hovering on the brink of extinction… [because they] want those who come after us to inherit a world where the wild is still alive,” sent an attention-grabbing polar bear mascot, named Frostpaw, to the march.  His intent was to carry the following message:

Carbon pollution and carbon profits are killing the planet. They are baking the Earth, acidifying the ocean, destroying human communities and driving species extinct. The poor are being hit the hardest and fastest, while the wealth-brokers and industry captains of Wall Street continue to rake in short-term profits from polluting the planet. The people will no longer let coal, oil, gas, transportation and agribusiness lobbyists block desperately needed action to stop greenhouse gas pollution.

Frostpaw, who was arrested along with other nonviolent protestors, later wrote in an email missive, “A night in jail is a minor inconvenience compared to the pain of villages overwhelmed by rising oceans; farmers ravaged by drought; hundreds of thousands forced to migrate by lack of water and destroyed infrastructure; and billions lacking the resources to deal with a dangerously heating, unstable climate.” 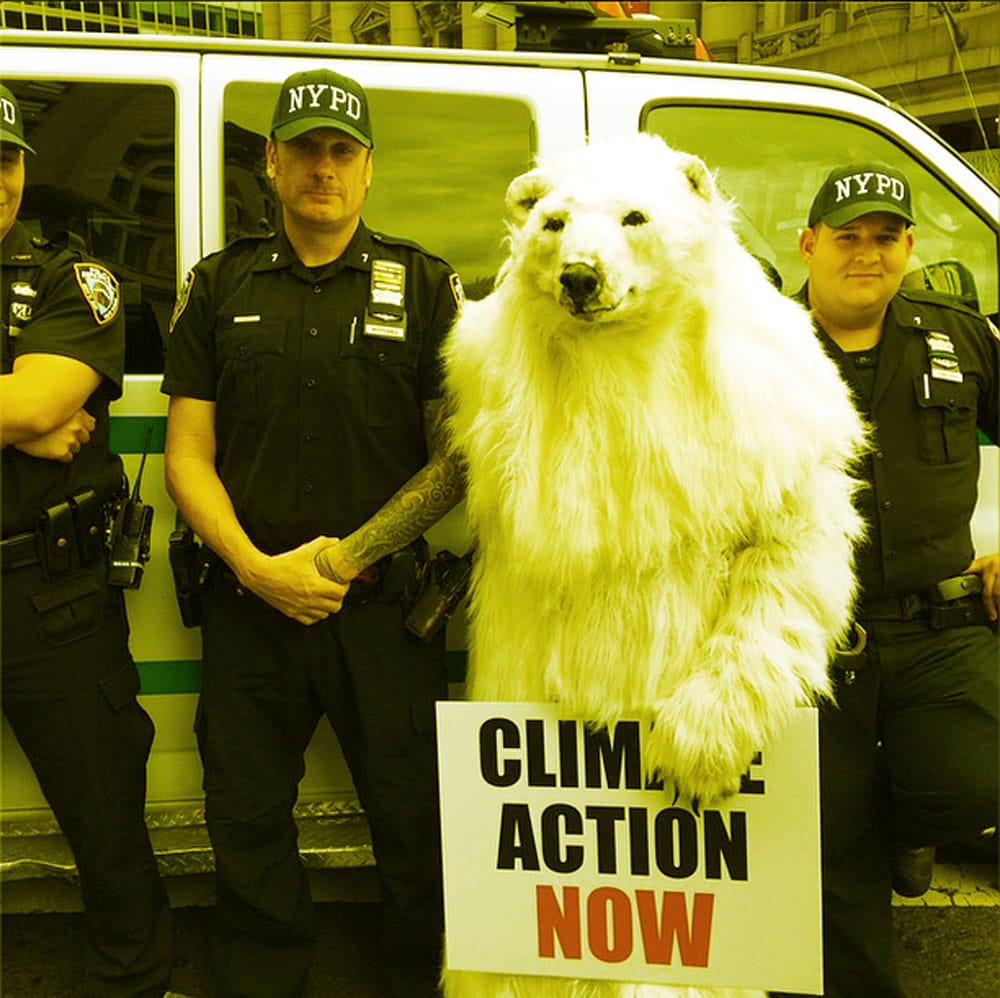 Photo: The Center for Biological Diversity.

Marchers in New York last weekend want business and governmental decisions to take into account their affect on the planet, and the humans and nonhumans who are trying to go about our lives without making it harder for others to do the same.

There is little doubt among scientists anymore that the climate is changing, or that human activity is increasing the carbon in the atmosphere and causing all sorts of dramatic shifts in the weather.  It’s as I heard someone say the other day: Climate change is not something you can choose whether to believe in or not.  It just is.  There is evidence that it is happening. The choice is whether or not you want to do something about it.

I was at a dinner party a few weeks ago with some friends, most of whom are farmers.  It was an abnormally cool August evening – definitely one of the coolest summer evenings I can remember in thirty plus years of living in the Piedmont of North Carolina, and so the topic of the weather came up.  No one was complaining about how nice it felt (except one woman who lamented the loss of her sticky hot summer days that let her know she was alive), but we all admitted to feeling uneasy about what all this odd weather meant for our future in Chatham County, and on this planet in general.

One friend, a vegetable farmer who, with his wife, sells beets, onions and a variety of other gorgeous vegetables at my local farmer’s market, stomped his foot and cried out, “The weather has become unhinged!”  He told us the story about how his family has been farming and homesteading in North Carolina for hundreds of years, and in the old barn on his grandparents’ property, he and his cousins recently found an ice saw.

An ice saw is what people use to saw bricks of ice off of the top of a frozen lake.  His grandparents had an ice saw that they used in central North Carolina just two generations ago.  Now, I in my almost forty years haven’t seen anything larger than a tiny pond even be able to hold a sprinkling of snow on its surface, let alone ice.  And that was only a handful of times, ever.  Although I do remember that we did get more snow and ice when I was a girl.

But my farmer friend’s family used to regularly use this contraption called an ice saw to saw ice off their really big pond to save and use in the barn all summer to keep things cool.  They could saw hundreds of bricks of ice off their pond.  Bricks large enough to last all summer.  That little bit of information was shocking to everyone in attendance at that dinner party.

But the thing is, people are divided when they consider how big of an issue climate change is, and often along partisan lines.  While 68 percent of Democrats called climate change a major threat to the U.S., only 25 percent of Republicans feel that way, according to a poll taken last month by the Pew Research Center.  But I bet that almost all of the farmers they polled, whatever their political persuasion, would call climate change a real threat.

Farmers, especially those who have been working the land, or whose families have been farming in the same place, for many years, cannot deny that the weather today is different and more extreme than it used to be.  They can’t afford to go on about their lives as usual, like many of us can, pretending nothing is happening.  They are just being affected too directly on a daily basis, and their entire livelihoods are at stake.

And come to think of it, when the livelihood of the people who raise our food is at stake, maybe the rest of us better stop and take notice.  That is, if we want to be able to afford local, healthful food in the decades to come.

Abundance NC created our Climate Adaptation Conference for farmers, agricultural scientists and climate researchers, in 2012, after a farmer came to us asking us to put on one of our DIY Sustainability Workshops on how farmers could better cope with climate change.  She said she and many of her farmer friends were having a hard time with all the recent extreme weather they had been facing in North Carolina:  the hottest summer, the earliest frost, then the latest frost, then the wettest winter, then the biggest drought… that we had seen in generations, or even in recorded history.

Instead of a workshop, we put together a conference that has been attended by hundreds of farmers and researchers over its first two years.  The conference, now in its third year, will take place in February, and will be a chance for us all to keep working together to share ideas on how to cope with what all the attendees agree is a serious threat.

Hopefully the world leaders listened to the voices of the hundreds of thousands of people who were marching to, as one placard read, “protect what [they] love.”  Well, here at Abundance NC, we love local food.  We love farmers.  We love polar bears, and bullfrogs, beavers, and anoles, closer to home.  We love North Carolina, and we love the rest of life on this big green planet.

When our upcoming November elections roll around, consider voting for someone who has local farmers and the future of our climate in mind.  And if you’d like to help out with our Climate Conference, please get in touch, or you can read more about the Climate Adaptation Conference here.  We can use volunteers, sponsors, donations of food and other materials, help with organizing and planning the event, and more!

And if anyone attended the People’s Climate March, we would love to hear what it was like to be on the ground! 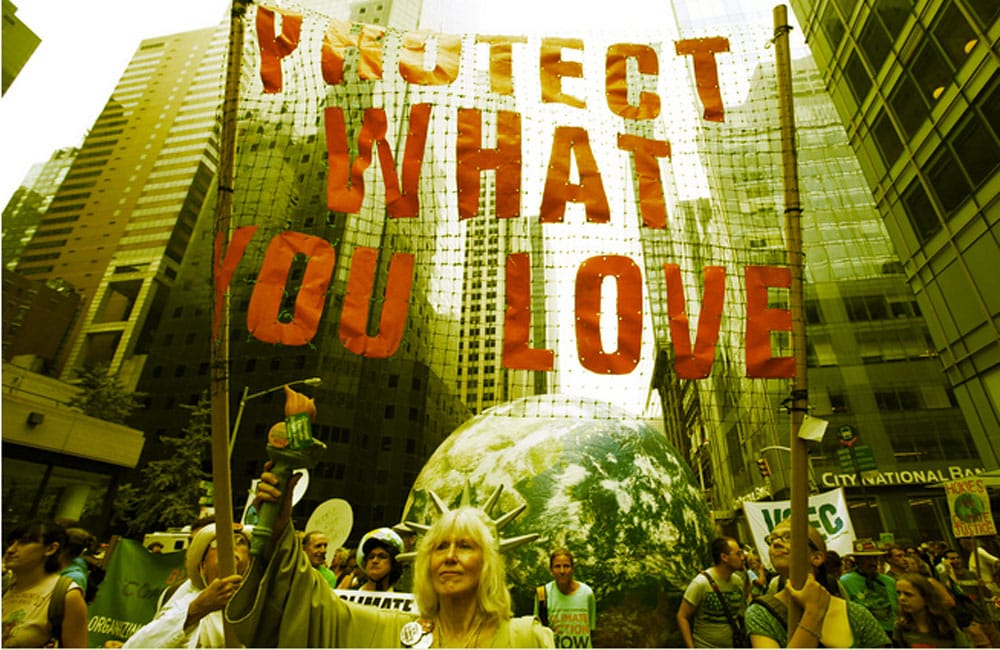