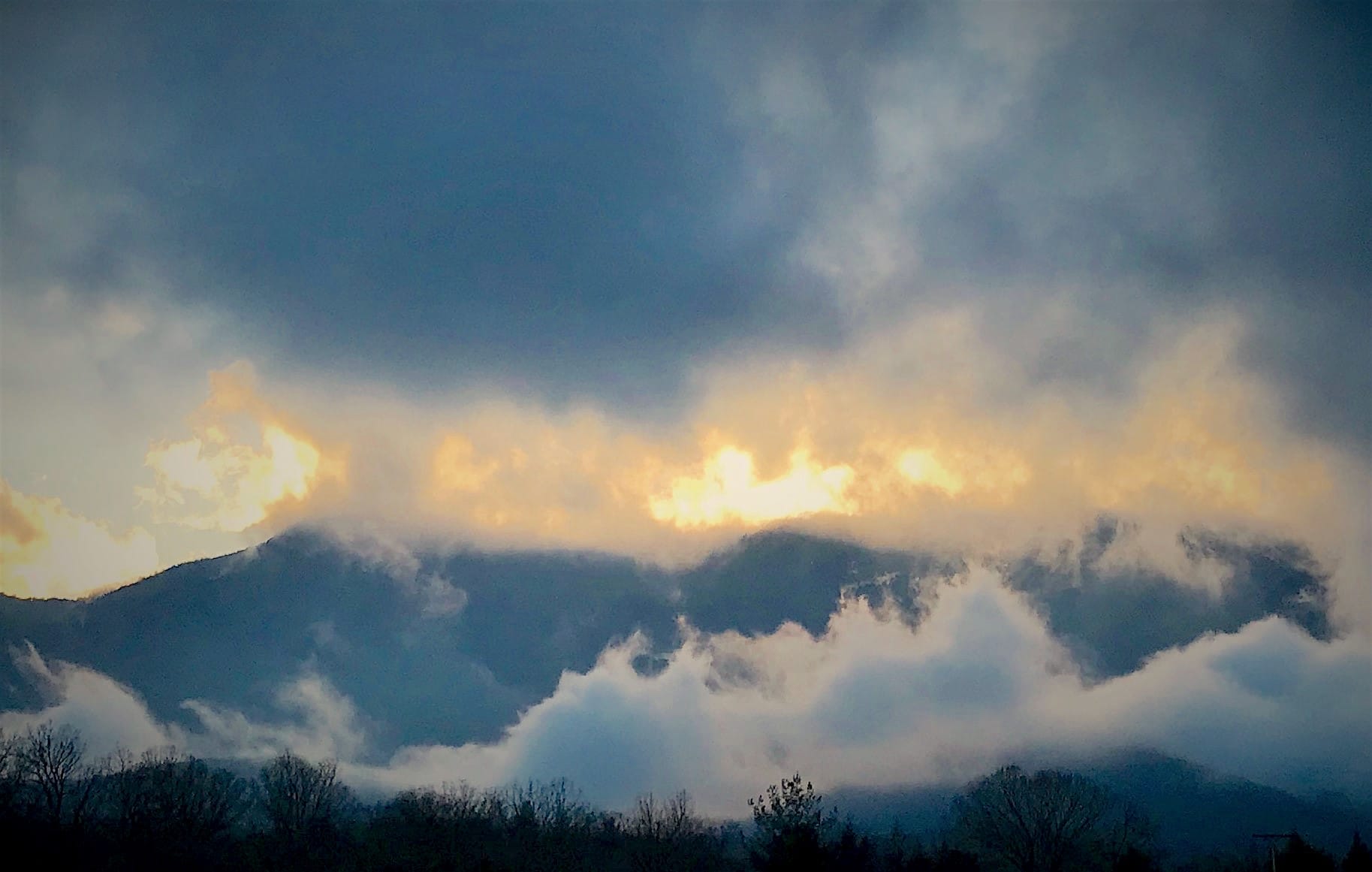 Most of us however, refer to Eden in metaphor only; we don’t actually expect it to become our zip code.

Two years ago, I moved from the Triangle area to Eden. Not Eden NC, but Celo NC, named in honor of the ‘Eve’ of the Cherokee people, Selu. A connection between Selu and the Black Mountain range in Celo has been put forward by Scott Ashcraft with the U.S. Forest Service, who believes this was the cradle of the Cherokee nation. As he’s shared this with Cherokee in the Qualla Boundary, some have said heir elders told them the Blacks were important. Scott notes a settlement under excavation at the northerly end of our valley, across from which is a petroglyph. Beyond this is the Celo valley and Black mountain range, in which only ceremonial artifacts have been found-none for dwelling. For the Cherokee, petroglyphs marked the boundary between the spirit and human realms, meaning-I live in the land of the Cherokee Great Spirit Yowa. 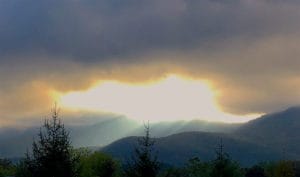 When standing in the valley with the powerful thrusting Black Mountains before you, the softly curvaceous Seven Mile Ridge behind, and fertility promulgated by the South Toe River in between, you get it. What else could humans think about this landscape of superlatives, but that you’ve landed in paradise? It is from our experiences in landscapes like this one that we created the word ‘abundance’ and its companion ‘holy’, to signify what precedes us and is not of our hand.

Holy abundance is ‘Eden’, where all things began in the perfectness their Creator intended.

Most of us however, refer to Eden in metaphor only; we don’t actually expect it to become our zip code. Though I’d visited the river and mountains for over thirty years to camp and hike, I was unaware of its connection to Kanati the Lucky Hunter and Selu the Corn Goddess-the Cherokee Adam and Eve-until I’d lived here a few months. I thought I had moved away from suburbia to heal, because after watching the myth of progress play out over and over with disastrous results for the natural world, I needed restoration. But the boxes had barely emptied before my understanding of who and what moved me began to deconstruct. 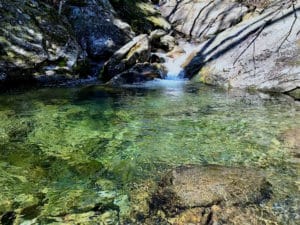 What I’d allowed of the landscape’s passive effects during my touristing visits, became an awareness of its active intent to have my undivided attention and keep me. Rest has been rare, with those majesties the Blacks and their light play reaching into my window to haul me off the couch or out of the bed, and out the door to commune. I feel seized every time they come into view, as if there is intent to entrance. You get the idea you are to prostrate, or bow, or at least kneel–somewhere lower than you already are, in other words.

They are teacher, and I am pupil. Thus established, I notice this as their work in me so far. When my attention is aroused by a feature in the landscape, I assume it means to arouse. I regard its nature and shift mine in the direction of its qualities-mountain ridge becoming spine, river flow becoming how to ‘be’ with difficulty. My lifestyle choices are increasingly focused towards what benefits a planet–using less of it, offering more of me. By softening the borders of my territory, I see how I am mediated by a landscape that has laid a claim on me. 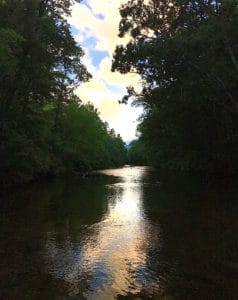 And I am not alone in feeling spoken to. When you ask others how they got here, you hear various versions of the same story, of being pulled so strongly that they stayed, even when it didn’t seem sensible or prudent. Whatever spoke to the Cherokee has not been silenced. As consciousness of the Voice rises, the people of the valley-locals and newcomers alike-respond. They are leveraging their sources of abundance to amend the circumstances of people left in the wake of capitalism. They are finding their way back to the common conversations of how to get along and help each other.

This is to be expected when people recognize true Eden, a place of abundance that can ensure a species thrives and continues. Unlike Adam and Eve who were cast out of the garden gates to forever toil and struggle, Kanati and Selu left knowledge and tools to repair the breach created by their disobedient sons–bows and arrows for hunting, and planting instructions for seeds of corn. Implicit in these gifts is an understanding that a return to paradise can be accomplished when we mature our trust in the earth’s wisdom.

Rehabilitating a faith in an intentionally communicative more-than-human world is hard to do in places where we have muted and strangled the wild voice. We can hope for communication, but when the landscape’s consistent experience is interference, these are the stories it tells. The boxwoods report being trimmed into submission-again, and the grass its latest failed attempt to sharpen to a fine point. Doubt manifests when your ears are filled with human noises. This wild place whispered in mine until I could get a fix on the garden gates. You could say, the Creator designed to make a permeable membrane out of me so that it could speak. You could say, the Creator placed its hands on my shoulders and tilted my ears forward to listen for Eden.

Because, then it came for me. 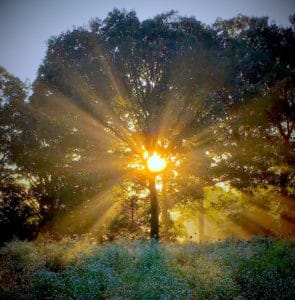 If you live in a place made quiet by human interference, have assurance that your place intends to be noisy, it intends to converse, and its noise is personal. Your evidence: the gurgling beacons of hope you admire–the dandelions pushing up through the sidewalk cracks, the seeds shooting skywards from the soil. The exuberant gushing of places in the natural world you return to again and again for restoration. The reverberating peals of planetary power you can’t stop watching on TV–the hurricanes, lightning storms, earthquakes, lava waterfalls, tsunamis. Deliciously noisy invitations, all of them. Solicitations from a sensuous planet. Melodious behests to feel and find it all within you, to know yourself as part of the magnificent wild whole.

Have faith people. People have faith. You are place-mediated. This is a conversation. This is a sagacious planet. And you are a beautiful incarnation of its dream.

The story of Kanati and Selu, as recorded from the Cherokee by James Mooney -http://www.nativehistoryassociation.org/kanati_selu.php

Katherine Savage lives in Celo, NC after answering its siren call to leave the beautiful Piedmont that raised her. Now she can bear witness to just how deeply the beauty and power of a landscape can move a person.  Mothering three daughters to adulthood and a career of supporting young children, have made visible how we can fall in love with our magical world, again and again and again. If you want to find her, try the garden, but if she’s not there, sit by the river for a spell.  For she’s off on a wander.