Urbanizing bees may be key to their survival 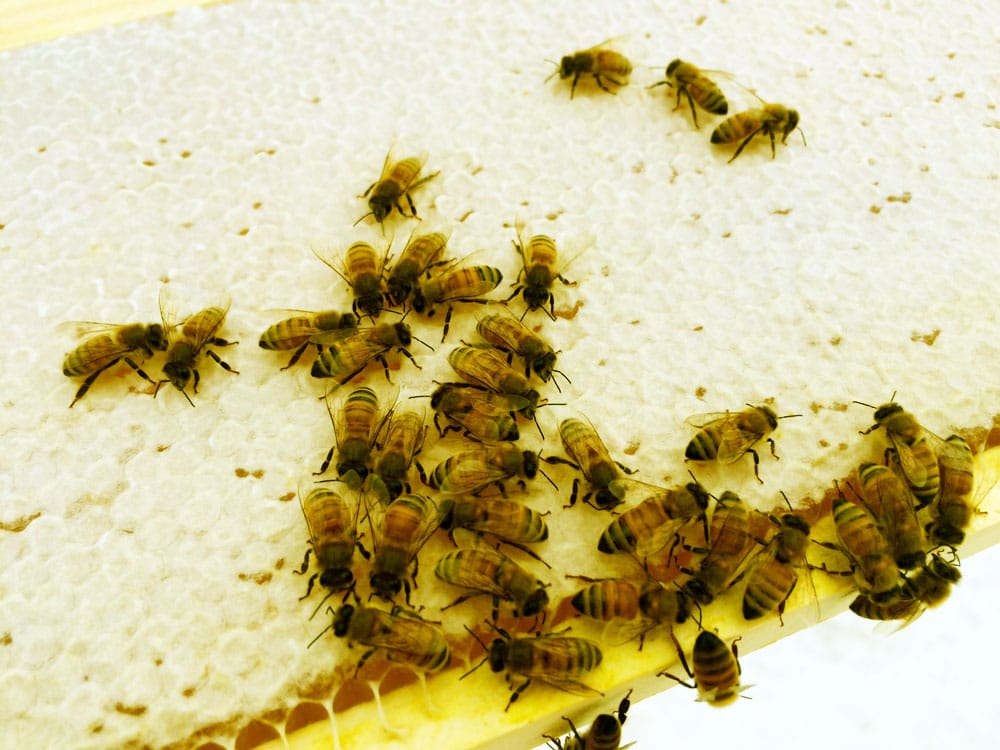 According to the U.S. Department of Agriculture, since the 1940s the number of managed honey bee populations in the United States has decreased by 50 percent.  This is not just bad for the bees – it’s bad for us.

The honey bee population accounts for more than $15 billion in crop value each year.  Every third bite of food we eat comes from a honey bee, and honey bees are responsible for pollinating over 80 percent of the flowering crops in the United States.  With such drastic declines in recent years, it is important, now more than ever, to try to understand what is happening to the honey bees.

Colony Collapse Disorder (CCD), the term used to describe the stark decline in honey bee populations across the U.S. in recent years, has created major problems for crops that depend solely on honey bees to pollinate their plants.  For example, the honey bee is the only pollinator of almonds.  If we were to lose all of the honey bees in the US there would literally be no almonds left. 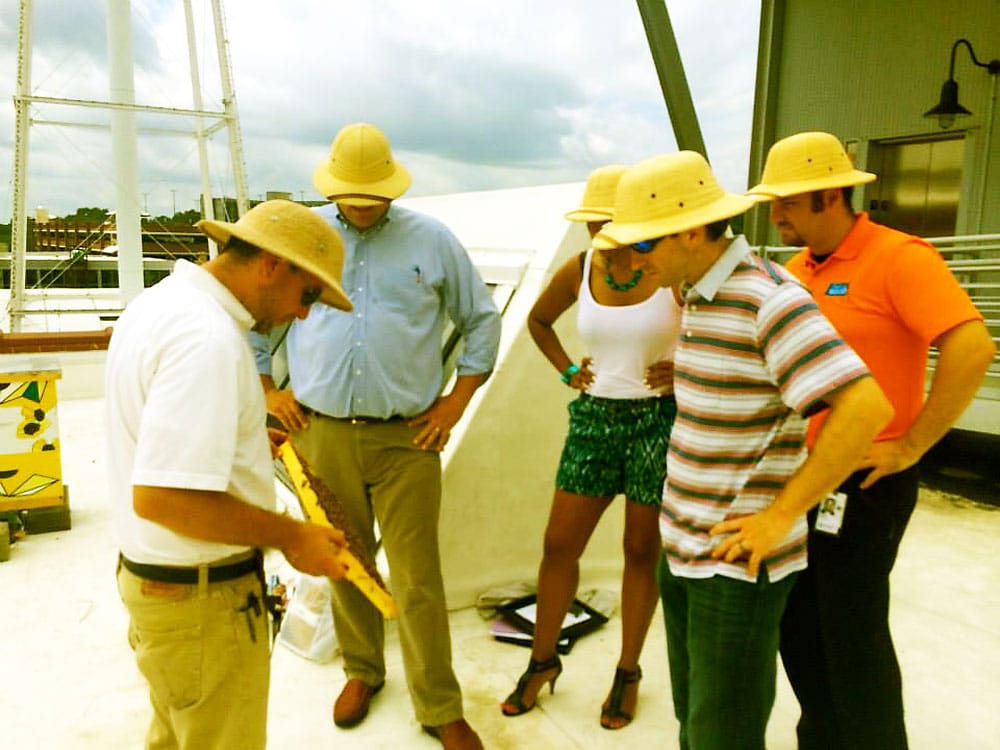 There is no one factor that scientists can pinpoint as the cause of Colony Collapse and the overall decline of honey bee populations.  There are a number of external factors that are known to play some type of role in their decline, including, but not limited to:  parasites (the most infamous being the Varroa destructor mite), pesticides, decreased land for foraging, decreased genetic diversity due to inbreeding, and stress.

Stress is a major factor that is causing problems for the honey bee population.  Due to the recent declines, beekeepers are now hired to move bees all over the country on trucks to make sure there are enough bees to pollinate crops during peak pollination.  This increases stress, reduces the health of a hive, and causes the hive to work in a constantly unstable environment.

Bee Downtown, a new nonprofit and partner organization of Abundance NC, focuses on creating healthy sustainable environments for honey bees, as well as creating a community that understands and supports their local bees and beekeepers.

Studies show that bees in urban environments are healthier than bees in more rural environments.  Instead of a monoculture of crop to pollinate, like rural bees have, urban bees are able to pollinate a variety of different floral sources, as well as ingest smaller amounts of pesticides.  Bees in urban areas also have a stable environment and are not subject to being moved across the country during peak pollination season.

In trying to combat CCD, Bee Downtown understands the benefits of urban beekeeping, but we take it one step further, by helping to create an entire community that understands the importance of honey bees.  Bee Downtown holds various educational events throughout the year for the community to come to and learn about ways they can help the bees.  We also hold beekeeping classes for members in the community interested in learning more in-depth about honey bees and the art of beekeeping.

How you can help advocate for honey bees:

Bee Downtown is a new nonprofit, based out of Durham, that strives to “Think Outside the Hive”.   Our mission is to create healthy, urban environments for the honey bee population through educational and sustainability efforts.  At this time Bee Downtown is in a fiscal sponsorship with Abundance NC while working on receiving our own 501c3 status.

Bee Downtown has two rooftop hives on the American Tobacco Campus in Durham, NC as well as the largest observation hive in North Carolina at the front of Burt’s Bees world headquarters located on the American Tobacco Campus as well. We plan to add more rooftop hives to the campus in the spring while hopefully adding additional rooftop hives throughout Durham as well. If you, or your business, are interested in sponsoring a Bee Downtown rooftop hive, or educational event, please contact: Executive Director, Leigh-Kathryn Bonner at lkbonner@ncsu.edu.

If you would like to donate to Bee Downtown, you can do so here. 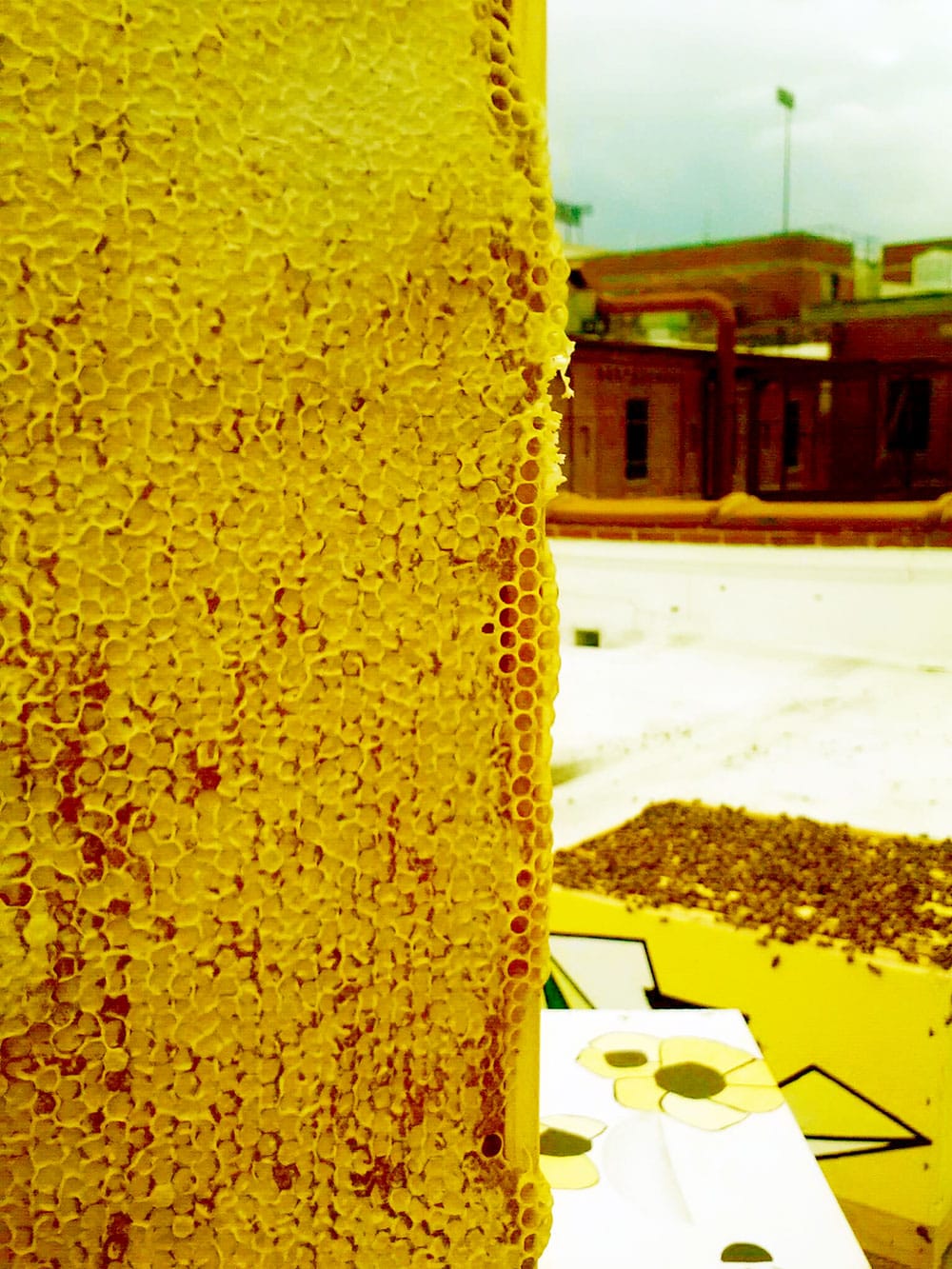 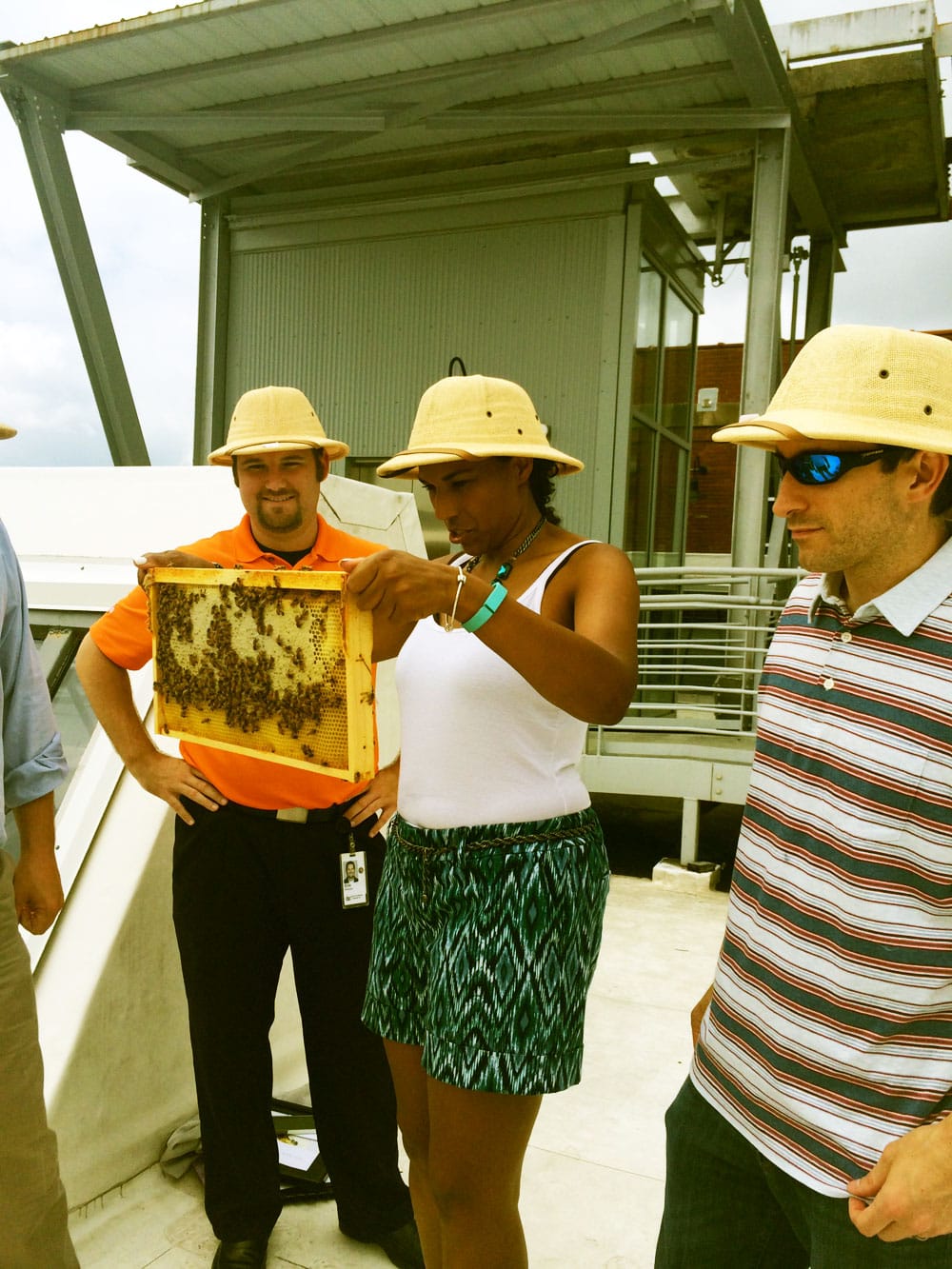 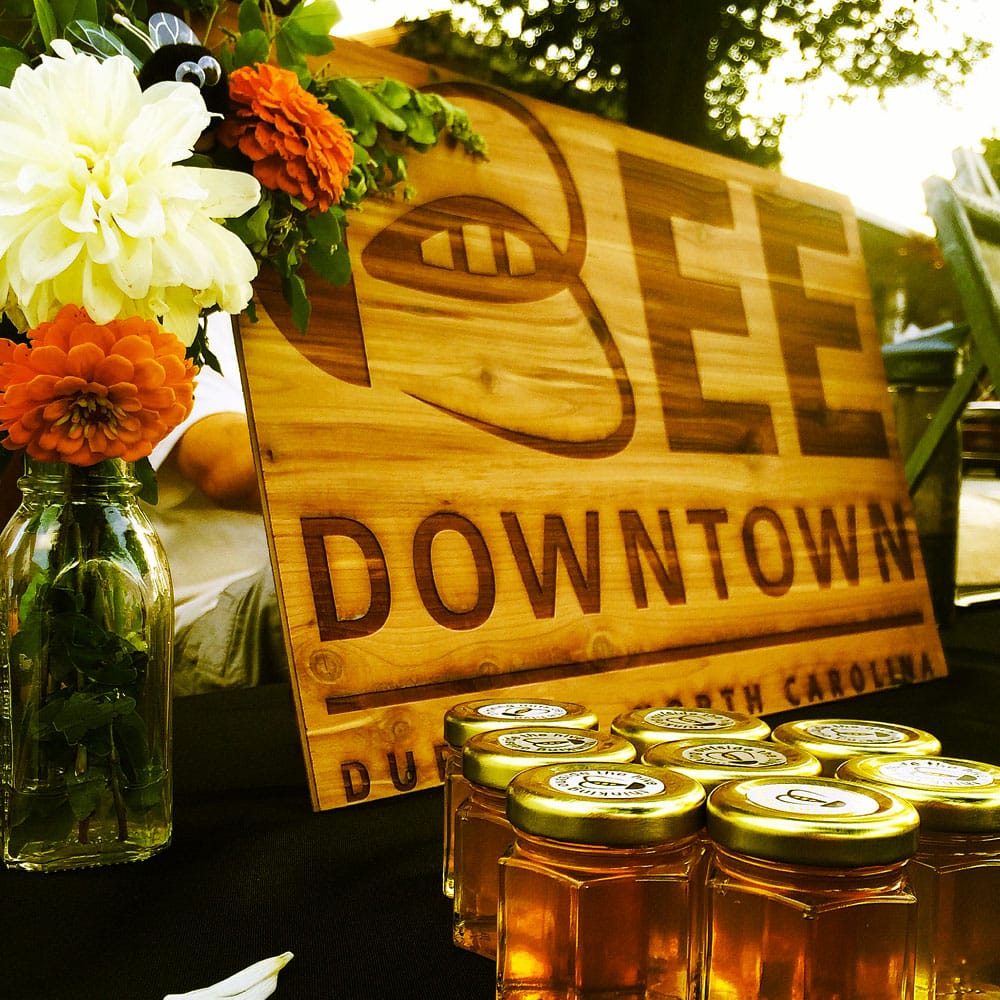 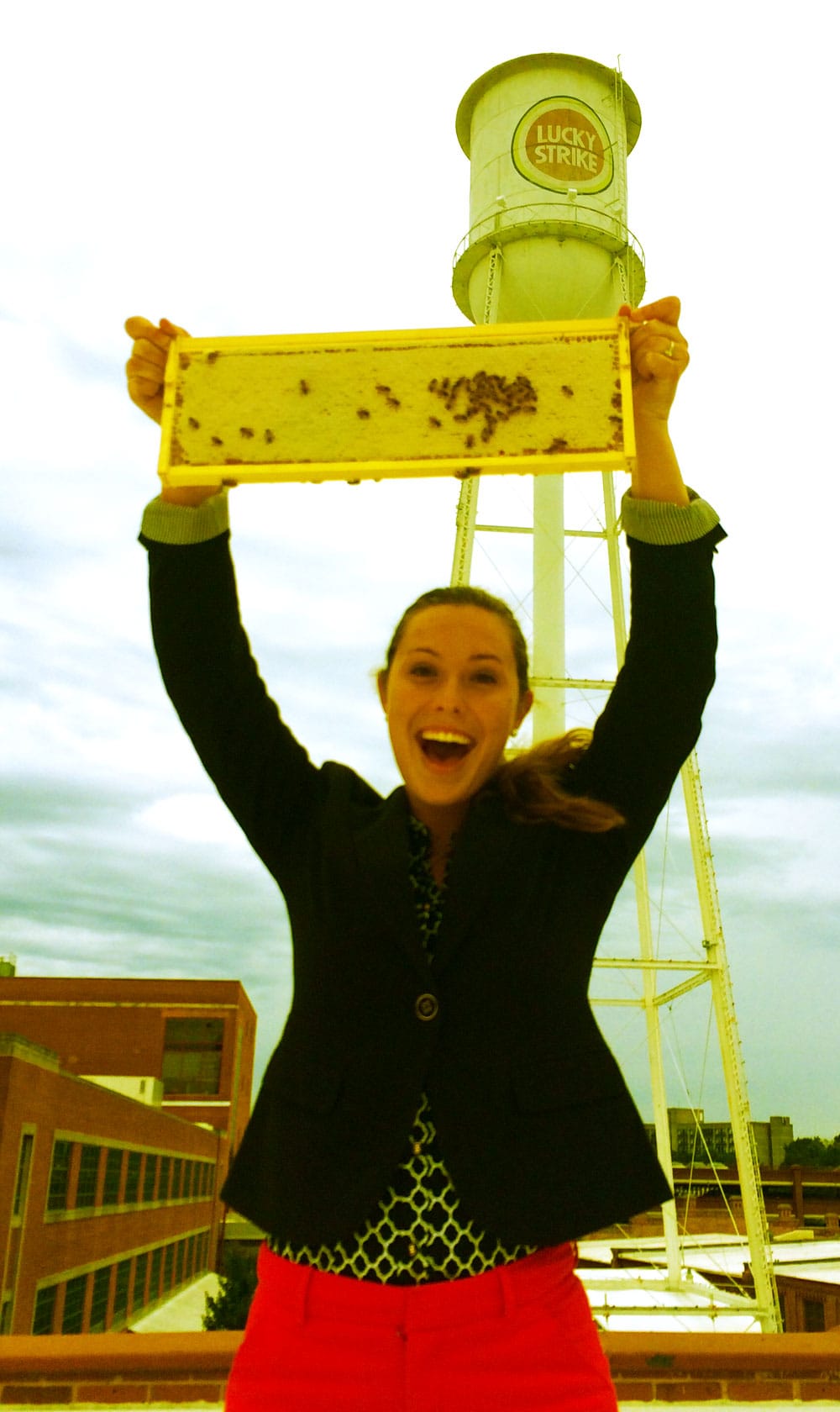 The author displays bees from one of the hives she installed on a downtown Durham rooftop, as part of the work of her new nonprofit organization, Bee Downtown.