Why so spicy? The science of peppers 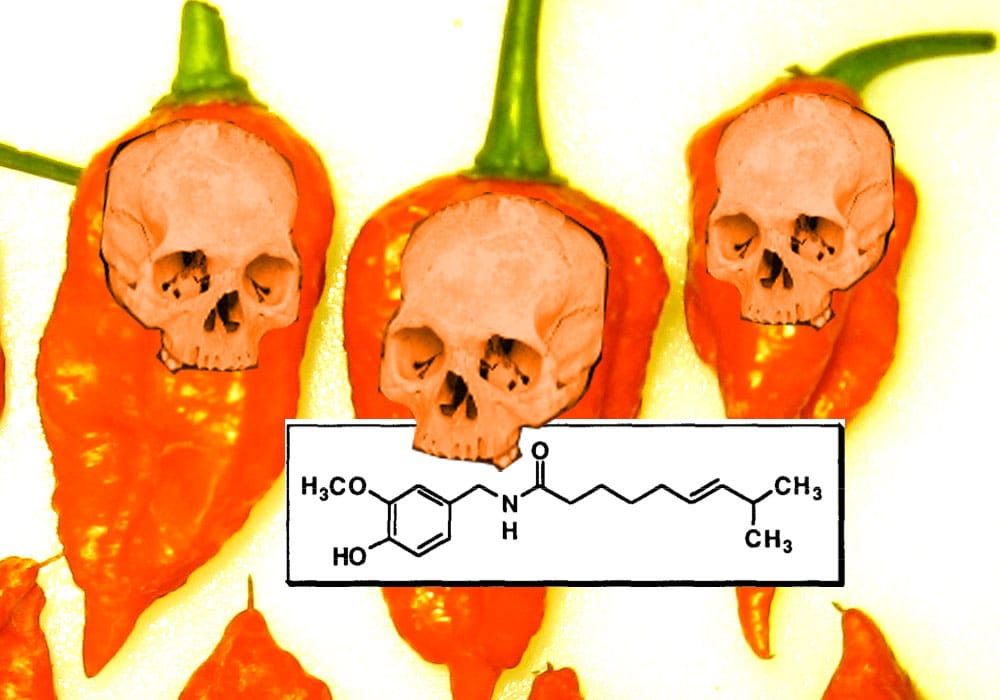 The peppers that will be showcased at this year’s Amazing Pepper Festival are delicious and colorful members of the nightshade family, Solanaceae.  Without this family, today’s garden would be sadly empty of popular favorites such as potatoes (Solanum tuberosum), tomatoes (S. lycopersicum), eggplants (S. melongena), and tomatillos (Physalis philadelphica).  Peppers are of the genus Capiscum, a name which originates from the Greek word “kapto,” which means, “I bite”.

Although there are about twenty-five species in the genus Capiscum, only five of these are commercially cultivated: C. annum, C. baccatum, C. chinense, C. frutescens and C. pubescens.  Most of the peppers you will be enjoying at the Pepper Festival are cultivars derived from C. annum.  These include bell peppers, poblanos, banana peppers, cayenne, Serrano peppers, jalapeños, and the new darling of the grill, shishitos. In contrast, habaneros, Scotch bonnets, datils, and Carolina Reapers, all originate from Capsicum chinense. Don’t be fooled by the word “chinense” which refers to an Asian origin; all Capiscum species originated in the New World.

The plant that gives the Solanaceae their common name, the nightshade family, is Atropa belladonna, the deadly nightshade.  While peppers produce capsaicin, a relatively innocuous compound that adds spice to our foods, deadly nightshade is armed with the chemicals atropine, scopolamine and hyoscyamine which can cause hallucinations, delirium, convulsions and death.  When used as eye drops, nightshade extract causes dilation of the pupils, an effect associated with sexual attraction.  This was a practice of Italian women during the Middle Ages, hence the name “belladonna” which means “beautiful woman”. 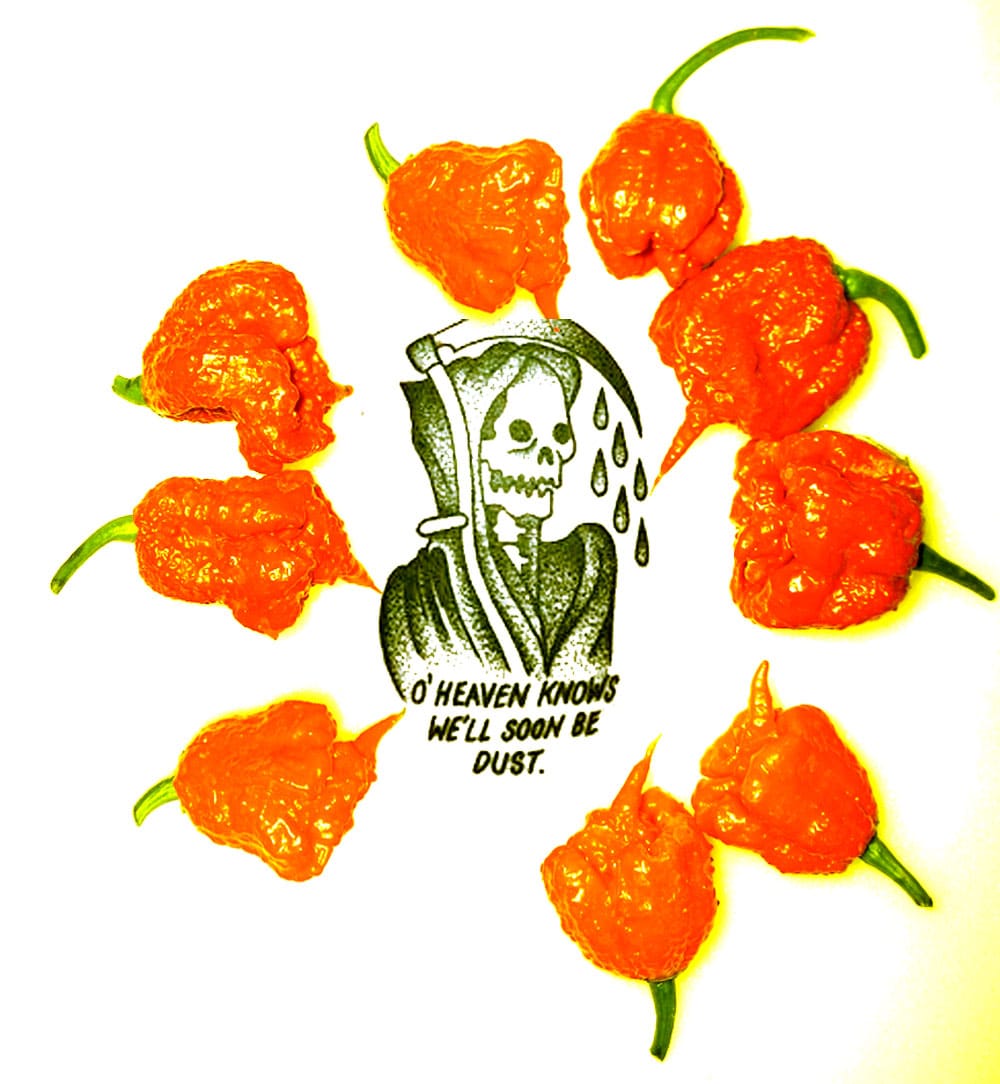 A not quite deadly nightshade: The Carolina Reaper pepper.

The friendly and tasty peppers you’ll be sampling at the Pepper Festival have none of these ill effects! Although some folks shy away from the spicier peppers, capsaicin-laden treats play a prominent role in many cuisines across the world. Capsaicin is a nitrogen-containing lipid that binds to a specific receptor called TRPV1 which is found on pain- and heat-sensing neurons. Interestingly, the capsaicin receptor is not found in birds who are, therefore, immune to capsaicin and are the primary dispersers of pepper seeds.

Capsaicin binding to the TRPV1 receptor initiates a cascade of events resulting in the perception of pain, or as we pepper fans like to think of it, that tingling bite that gives a dish a bit of kick.  For those of you who don’t understand the appeal of a meal that activates pain receptors, here is an explanation:  the experience of pain induces the body to release endorphins, “feel good” molecules that can produce sensations of pleasure and euphoria (as in a runner’s “high”).

The “spiciness” or “heat” of peppers is measured in Scoville heat units which correlate with the concentration of capsaicin. The “Scoville Organoleptic Test” was developed by the pharmacist Wilbur Scoville in 1912; in this test, serial dilutions of capsaicin extracted from dried peppers were provided to five “trained” testers.  The concentration at which the majority of these testers was unable to detect a sensation of “heat” is the basis for the Scoville unit assignment.

As originally conceived, there are a number of problems with this strategy.  For one thing, this test is entirely subjective and, since there is a great deal of variability in sensitivity to capsaicin, the Scoville unit is not an objective or even reproducible standard.  Furthermore, the Scoville test was based on dried peppers; although dried peppers have a role in world cuisine, they are nearly always reconstituted in some sort of liquid (a notable exception being crushed red pizza peppers!).

In modern times, pepper heat is usually measured using high performance liquid chromatography which specifically measures the concentration of capsaicin in a pepper sample. Pure capsaicin is listed at 16 million Scoville units; the current world record holder for pepper heat is the Carolina Reaper which clocks in at 1.6 – 2.2 million Scoville units. Even with modern methods of measurement, Scoville units are typically reported as a range since factors such as soil temperature, genetic variation, hours of sunlight, moisture and fertilizer type all effect capsaicin levels.

Capsaicin isn’t just a delicious component of treats both sweet and savory; it also has a wide range of medicinal uses. Once a nerve has been stimulated with capsaicin, there is a lengthy refractory period during which it will not respond to other stimuli;1 for this reason, capsaicin plays a key role in the treatment of chronic pain disorders.   In the field of oncology, there has been extensive research to determine the role of capsaicin in preventing cancer and in the treatment of cancer.2,3

Regardless of the health benefits and potential therapeutic uses of capsaicin, the Pepper Festival focus October 5th at Briar Chapel will be on pure deliciousness. Dig in and enjoy, with perhaps just a thought or two to the flavorful biology of the beloved pepper!